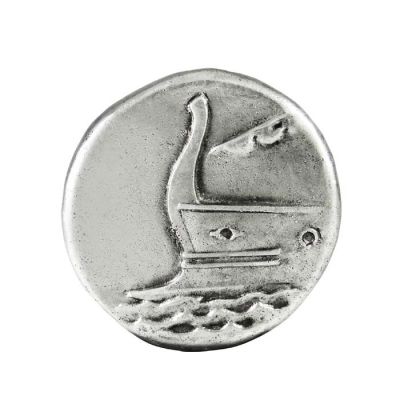 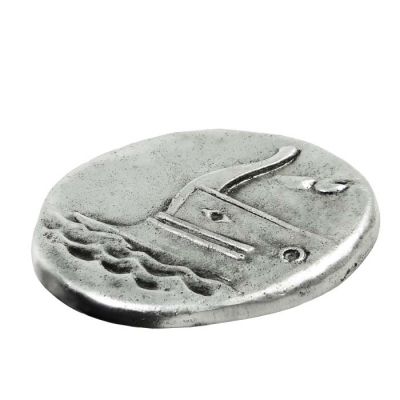 We created a paper weight, detail from a rodian trireme. The design of the ship was found embossed in a rock from the ancient acropolis of Lindos in the island of Rhodes. The creator was Pythokritos, a sculptor from the Hellenistic period. It dates back to 200 B.C. The paper weight is made od brass, plated in silver solution 999°.

Trireme is originated from Corinth in ancient Greece. It was an ancient warship, which was fast, maneuvrable, and had a bronze ram on the prow. According to Thucydides, it was the Corinthians, who first adopted triremes on the Greek mainland, since 700 BC and then many city-states created triremes, as well. The trireme was so-called because of the arrangement of rowers in three lines down the length of each side of the ship.

The ships were built using softwoods such as pine, fir, and cypress for interiors and oak only for the outer hulls. Oars were made from a single young fir tree and measured some 4.5 metres in length. The use of the lighter woods made the ship highly maneuvrable. The ship had mostly military use. The principal weapon of the trireme was the wooden ram, which was coated in bronze and was affixed to the prow.

The design of the ship was found embossed in a wall in the Acropolis of Lindos in Rhodes and it was created by the sculptor, Pythokritos.