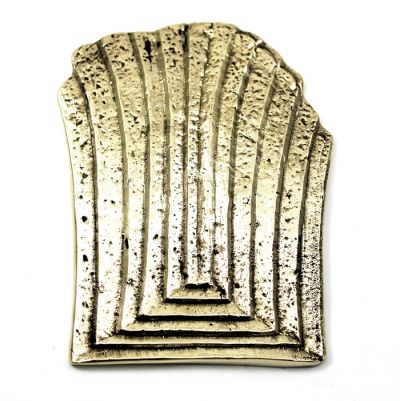 Tripod head paper weight bearing a geometric design. This handmade brass paper weight (presse papier) comes from the upper part of a the leg of a bronze tripod and is part of its decoration. Tripods were the most magnificent and anong the most numerous votive objects found at the sanctuary from the Geometric period. In ancient Olympia was the great altar of Zeus which stood at the south-east of the temple of Hera. Tripods were propably made in a Corinthian workshops and dated from the end of the 8th century B.C.

Take a look at the other designs of the tripod.

In western Peloponnese, in the beautiful valley of the Alpheios river lays the most celebrated sanctuary of ancient Greece. Dedicated to Zeus, the father of the gods, it sprawls over the southwest foot of Mount Kronios, at the confluence of the Alpheios and the Kladeos rivers. Olympia became the most important religious and athletic center in Greece. Its fame rests upon the Olympic Games, the greatest national festival and a highly prestigious one world-wide, which was held every four years to honor Zeus. Local myths concerning the famous Pelops, the first ruler of the region, and the river Alpheios, betray the close ties between the sanctuary and both the East and West.

The Archaeological Museum of Olympia, is one of the most important museums in Greece, presents the long history of the most celebrated sanctuary of antiquity, the sanctuary of Zeus, father of both gods and men, where the Olympic Games were born.

Numerous votive offerings, mainly figurines, bronze boilers and tripods, were placed in the countryside, on tree branches and in altars. In the Geometric era, the first figurines depicting Jupiter, the master of the sanctuary, are also dated. In 776 BC. the rebellions were reorganized in honor of Iphitos, King of Ilida, Clehoshen of Pisa and Lycourgus of Sparta, who also established the sacred truce. Olympia was held every four years and soon took a panhellenic character.