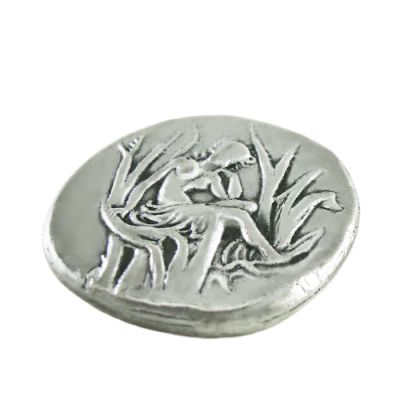 Inspired by the ancient Greek civilization, with its rich culture, history and art, we created for you a silver-plated copy of the silver stater coin of Gortyn, with Europe pictured on the obverse of the coin and Zeus transformed into a calm bull, on the reverse. A great collectible for the admirers of the ancient Greek world, but also for coins collectors.

On the silver stater of Gortyn (325 BC), Europe is depicted on the obverse, with a veil that covers her legs from the waist down, while she is resting on the branches of the sacred plane tree (platanus), leaning her head on her hand. On the reverse, there is a bull, that according to the legend was Zeus, turning its head to the left.

Gortyn, was the Roman capital of Crete and a flourishing Minoan town between 1600-1100 BC. Gortyn, was among the first cities of Crete that issued coins from the 5th to the 1st century BC. In the didrachm of Gortyn, the whole myth of Zeus and Europe is revived, the most famous myth about Cretan generation.

Europe was the daughter of King Agenor of Greek Phoenicia. One day, that she was lying on the shore, Zeus the Cretagenis saw her from the sanctuary of Mount Ida and fell in love. Being a master in disguise and being able to take whatever form he wants, Zeus appeared before her in the form of a bull and knelt at her feet. She climbed on the animal's back, and he rushed into the sea and carried her to Crete, where they were joined together in a blooming grove.

From their love Minos was born, who became a king and founded a powerful naval empire and contributed to the development of the Minoan civilization. The original coin is  at the Museum of Heraklion in Crete and weights 11,88 grams.