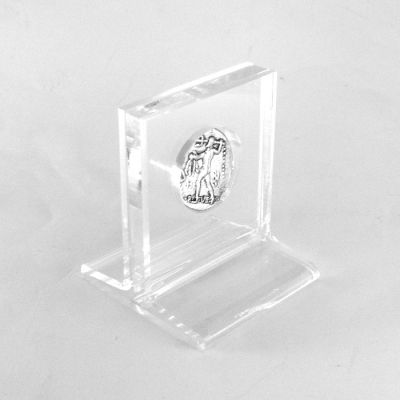 Silver stater of Phaistos, Crete. On the one side there is a depiction of the copper giant statue of Talos with the inscripiton TALON (the statue is a work of Hephaestus), who was the protector of whole Crete. On the other side a bull attacking with the inscription FAIST[ION]. Talon the giant was believed that he was protecting all the island and was doing the tour three times per day and was throwing rocks to the enemy fleets. Handmade copy in solid brass silver-plated in silver solution 999°. 300-280 B.C.

Talos was a mythical guardian of Crete. It was a giant, anthropomorphic and copper-shaped body. With regard to its origin, there are different versions. The most famous, by Apollodorus, says that he made him god Hephaestus and gave it to King Minos to keep Crete. Plato considers him a real person, his brother Rodamanthy. Apollonius the Rhodian says it was a gift of Zeus in Europe, which then gave it to her son Minos. Later on, I. Kakridis, based on the fact that Hesychios writes that he meant to be a sun (while Talaos is the name of Zeus) in Crete [1] and based on other elements, he expressed the view that he was a solar deity later transformed into a hero.

Talos, according to Plato, was charged with the task of overseeing the implementation of laws in Crete, carrying them with him on bronze plates. Most sources report that he was a watchful watchdog of Crete who was filming the island's shores three times a day. In others he was feathered and this duty was done by flying. It kept the unknown ships approaching Crete by flying the huge stones. If the strangers were already disembarked, they would blow them with his breath or fire his bronze body on some fire, hug them tightly on it, and then burn them.

The end of Talo came when he met with the Argonauts who were coming from Colchis. Wanting to bind the Argonauts on the island faced the giant who kept them in the distance. Then Medea, traveling with them, spoke to Talo, promising immortality, and so Jason could remove his nail into his heel that closed the one vein running all over his body and contained johor , killing him. Another version reports that Philocteti Poia's father had killed him by hitting him with an arrow in his own unique weak spot.
Talos appears in several coins of Phaistos.