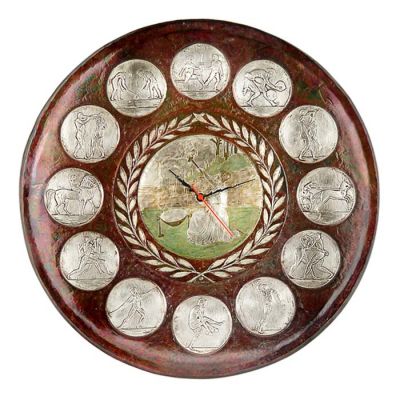 The ancient Olympic Games seem to have begun in the 776 B.C., in honour of Zeus. We created a clock, inspired by their long and great history. The clock features sports and rituals from the ancient Olympic Games, as well as the kotinos, the award for the Olympic winners and the depiction of the Olympic flame lighting. The various depictions of the features are copied from black-figured vases. It is made of copper with partial silver-plating of the sports. An artwork with special historical significance, for your home or office decoration.

The ancient Olympic Games were religious and athletic festivals held every four years, at the sanctuary of Zeus in Olympia, Greece. The competition was among representatives of several city-states and kingdoms of Ancient Greece. The most widely accepted inception date for the Ancient Olympics is 776 B.C. They were initially a one-day event until 684 B.C, when they were extended to three days. In the 5th century B.C., the Games were extended again to cover five days.The Games stopped, when the emperor Theodosius I decreed that all pagan cults and practices be eliminated in 393 A.D.

The ancient Games, throughout the years, included running events, such as the stadion race, the diaulos, the dolichos and the hoplitodromos, or "Hoplite race". The rest of the contests were wrestling, boxing, pankration, a pentathlon and equestrian events. The Pentathlon consisted of a jumping event, discus and javelin throws, a running race and wrestling. Pankration was a primitive form of martial art combining wrestling and boxing, and was considered to be one of the toughest sports. The equestrian events included horse races and chariot races and took place in the Hippodrome.

Only freeborn Greek men were allowed to participate in the Ancient Games, regardless of their social status. Participation in most events was limited to male athletes except for women who were allowed to take part by entering horses in the equestrian events. Married women were not allowed to participate in the ancient Olympic Games, or even to watch them. However, unmarried women could attend the competition, and the priestess of Demeter, goddess of fertility, was given a privileged position next to the Stadium altar.

The official award ceremony would take place on the last day of the Games, at the temple of Zeus. The herald announced the name of the Olympic winner, his father's name, and his homeland. Then, the Hellanodikis placed the sacred olive tree wreath, known as kotinos, on the winner's head. The winner of an Olympic event often was received with much honour throughout Greece, especially in his home town, where he was often granted large sums of money and prizes including vats of olive oil. Sculptors would create statues of Olympic victors and poets would sing odes in their praise for money.