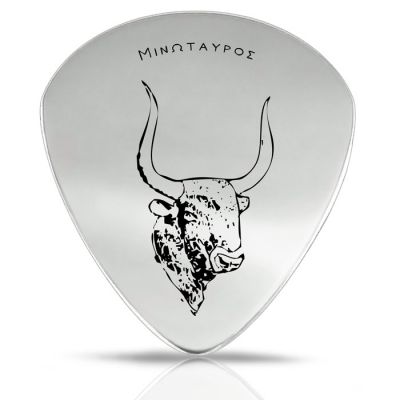 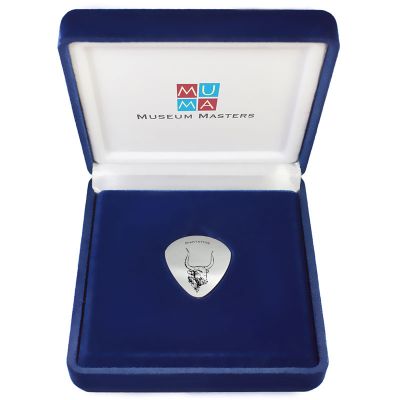 The engraved design of the bull's head on our guitar pick is inspired by a rhyton in the shape of a bull's head and the Minotaur, which according to Greek mythology, lived on the labyrinth at Knossos in Crete. The Minotaur was a creature with human body and head of a bull, who was killed by Theseus. The rhyton was found at the Little Palace of Knossos and it dates back to 1600 B.C. The guitar is crafted by hand and is made of solid silver 925°.

In greek mythology, the Minotaur is a monster with a human body and a bull's head. It is said to have been the offspring of the intercourse of Cretan queen Pasiphaë with the bull sent from God Poseidon to Minos.

Minos traped him in the labyrinth, and fed him with the bodies of the seven youths and seven maidens whom the Athenians at fixed times were obliged to send to Minos as tribute. The Cretan Labyrinth was an elaborate maze-like construction, designed by the architect Daedalus and his son Icarus, on the command of King Minos of Crete. The Minotaur was eventually killed by the Athenian hero Theseus. It was often represented by ancient artists either alone in the labyrinth, or engaged in the struggle with Theseus.

The steatite rhyton in the shape of a bull's head was found at the Little Palace of Knossos and dates to 1600 B.C. The original is now at the Heraklion Archaeological Museum in Crete.