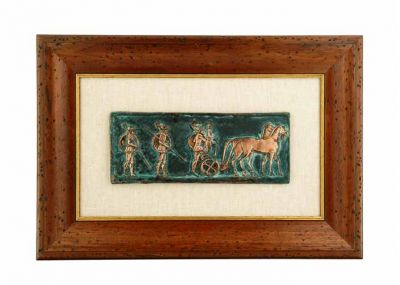 Relief from the base of a marble Kouros statue, with representation of warriors in a chariot race, from the wall of Themistocles, in Kerameikos in Athens, dated 510 B.C. The relief representation is made of copper with natural oxidation on linen paspartou with wooden aged frame.

Hoplites were citizen-soldiers of Ancient Greek city-states who were primarily armed with spears and shields. Their main tactic was the phalanx formation. The armor suit and weapons of the hoplites were ussually made of bronze. Hoplites generally received basic military training. The word hoplite derives from hoplon, the type of shield used by the soldiers, although, as a word, hopla could also denote the soldiers' weapons or even their full armament.

The relief from the base of the kouros statue is displayed in the National Archaeological Museum of Athens.