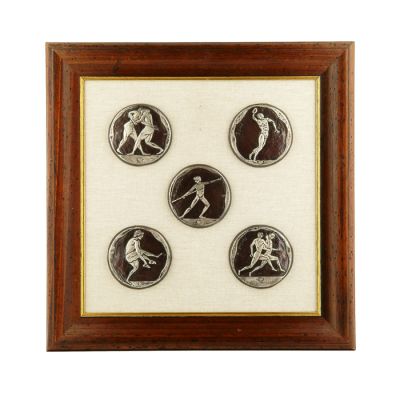 "Pentathlon", was a sport feature that included five events, jumping, discus, race, javelin, wrestling. It took place for the first time in the Games of 708 BC, and from then on it became a sport of the Olympic Games. The representations of the sports are made of silver-plated copper with patina, on linen paspartou with wooden aged frame.

The Pentathlon became an Olympic event in 708 BC during the 18th Olympiad. It consisted of five events, discus, javelin, long jump, running, and wrestling. During other Panhellenic Games, running and wrestling were held as separate events as well, but jumping, discus, and javelin were only held as part of the pentathlon.

The Pentathlon combined the light events and heavy events of the Games. Participation in the pentathlon required a combination of qualities such as speed, strength, skill and endurance. The pentathletes were greatly admired for their abilities and also they were role models for the other athletes.

The representations of the ancient Olympic events are depicted in ancient black-figure vases.