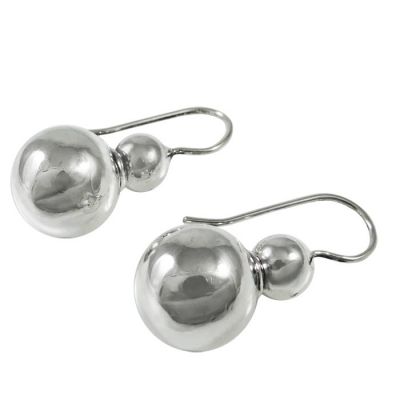 Inspired by the magnificent golden earrings that were found in Polis Chrysochous in Cyprus, we created a pair of earrings in silver 999° and in a modern and artistic approach. Their beautiful design, which consists of two hemispheres in each earring, motivated us to give the symbolic name Selene and Gaia. A truly special and unique piece of art and jewellery, that will satisfy even the most particular tastes.

The silver earrings are inspired by the golden pair of earrings found in Polis or Polis Chrysochous in Cyprus, that are kept in the museum of Cycladic Art. Earrings consisting of a gold hemisphere surmounted by a second smaller hemisphere appeared in the 1st century AD and they survived only until the 2nd century AD. This type of earrings was depicted in funerary portraits and similar earrings have been found not only in Cyprus, but also in Greece, Palestine and Italy.

The two hemispheres that we created, symbolize Selene and Gaia. In Greek mythology, Gaia was the personification of the Earth, one of the Greek primordial deities. Gaia was the great mother of all, the primal Greek Mother Goddess, creator and giver of birth to the Earth and all the Universe. The heavenly gods, the Titans and the Giants were born from her union with Uranus (the sky), while the sea-gods were born from her union with Pontus (the sea).

Selene is the goddess of the moon in greek mythology. She is the daughter of the Titans Hyperion and Theia, and sister of the sun-god Helios, and of Eos, goddess of the dawn. Selene was regarded as the personification of the moon itself. The name is of Greek origin, it is likely connected to the word selas, meaning "light". Selene was commonly referred to by the epithet Phoebe. She was sometimes called "Cynthia" and Mene. In antiquity, artistic representations of Selene included sculptural reliefs, vase paintings, coins, and gems.