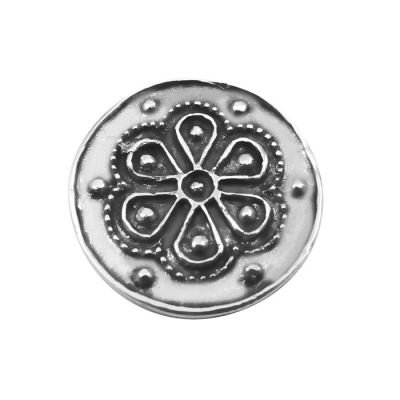 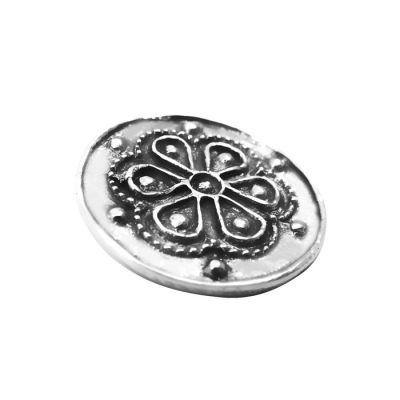 Brooch with a decorative round-shaped rosette (rodakas) with floral decoration and an engraved flower, consisting of six leaves and decorative beads. It is inspired by a mycenaean rosette bead, found at Mycenae, dated to 1400-1300 B.C. The rosette were used extensively in ancient Greek-Mycenaean jewels and in sculptures, throughout Ancient Greece, Mesopotamia, Egypt and other ancient civilizations. They usually had six or eight or twelve leaves, and sixteen leaves during the Macedonian Dynasty. The rosettes were engraved on marble and stone or they were made of gold to decorate the cloths, the belts and jewelry for both men and women or the diadems and wreaths of the Kings. The pendant is handmade, made of silver 925° and offered with a black cord.

You may also like to see the earrings, the ring, the bracelet and the pendant in the shape of the rosette.

The rosette or rose or rodax or rodakas in Greek is a round, stylized flower motif, used extensively in ancient Greek-Mycenaean jewels, among its other decorative uses in sculptures, architecture and pottery, appearing throughout Ancient Greece, Mesopotamia, Egypt and other ancient civilizations. These floral designs were often found at funeral sites and as a motif on ancient musical instruments.

The rosette derives from the natural shape of a rose or a rosette and it is often surrounded by a circle and engraved on stone, marble or gold to create decorative ornaments or to be used at the intersection of two materials. Mycenaean rosettes come usually in six or eight or twelve leaves. They were made of gold and were used to decorate cloths for both men and women. They were also carved in belts or created as repeated motifs in necklaces, and as single decorations in earrings and rings.

One of the earliest appearances of the rosette in ancient art is from the Minoan Crete. The rosette design has been found on the famed Phaistos Disc, recovered from the Phaistos archaeological site in southern Crete.

The shape and the number of the leaves, as well as, its symbolism are connected with beliefs of the ancient Greek religion.

The rosette was originally used as an ornament in diadems of Mycenaean Queens. In the classical period, rosettes decorated the roofs of the temples of Aphrodite, the Asclepia temples, the Dome of Epidaurus, many frescoes at Akrotiri on Santorini and the capitals of the Temple of Demeter at Eleusis.

The rosette was considered as a solar symbol in many ancient civilizations and as a royal symbol of the Macedonian Dynasty. It was depicted at the centre of the "Sun of Vergina" and it adorned many gold wreaths. During the Macedonian era, the rosette leaves were sixteen. The number of leaves had timeless symbolism. They symbolized the four elements (air, earth, fire, water), the seven wonders of the ancient world or the twelve gods of the ancient Greeks and the domination of the Macedonian Kings. It was symbols of beauty, chastity, worship and power.

Later on, the rosette was associated with the Christian faith and specifically, with the cult of the Virgin Mary. The rose or the rosette is often painted at icons of the Mother of Jesus. Like the ancient-Greek rosette, its shape resembles a small rose, with open and pointed leaves, surrounded by a circle. Its leaves are either four, in the shape of a cross, or seven and more, where four of the leaves are forming a cross. In the images of the Virgin Mary, the rose symbolizes purity of faith or the crucifixion of Christ.