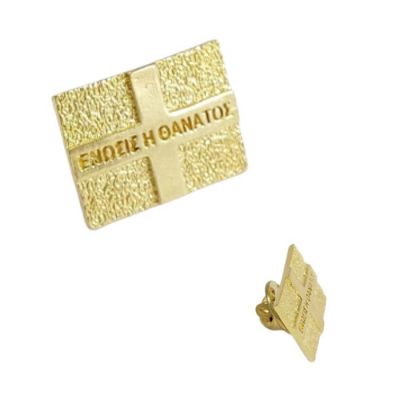 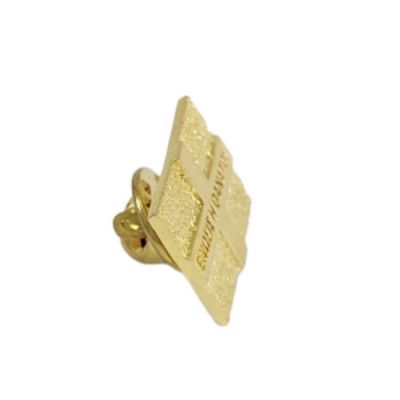 The flag used during the Cretan War of Independence 1866-1869. The inscription on the flag reads "Enossis - Thanatos" which means "Union or Dead" This glorious Greek revolution flag, now offered to you as a pin handmade of solid brass.

The Cretan Revolution of 1866-1869 was one of the most important of a series of revolutions in 19th century Crete against Ottoman rule, and was in favor of union with Greece. Although the revolution itself was not crowned with success, the event of the explosion of the Arkadi Monastery, which caused the death of approximately 300 besieged and 700 civilians, had a great impact on international public opinion as one of the aspects of the entire Eastern Question.

During the Revolution of 1821, the Christian populations of the island had revolted against the Turks along with the rest of the Greeks, but despite sporadic successes, the revolution was suppressed. In 1828 Crete came under the control of the Egyptian leader Mohammed Ali Pasha, but in 1840 it again came under the direct control of the Sublime Gate. In 1841 and 1858 Crete rebelled again. Finally, from 1858, some rights were recognized for the Cretans, such as to bear arms, as well as a series of regulations regarding Christian law and absolute freedom in the exercise of religion. The Cretan Revolution of 1866 is considered the "second '21".
Area:
Crete
Date:
1864 - 1936 A.D.
Dimensions (WxHxD):
2 cm x 1.5 cm x 2mm
Gross Weight:
50 gr
Includes:
Gift packaging - Description Greek & English
Material:
Brass
Subcategory:
Brooches
Weight:
6 gr