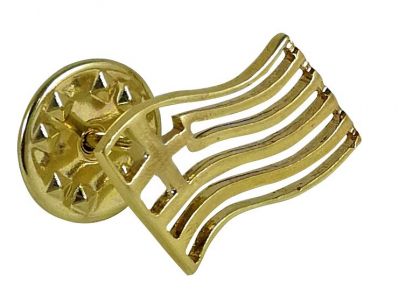 Greek Flag Pin. The glorious Greek flag, now offered to you as a pin handmade of solid brass.

The national flag of Greece, popularly referred to as the "blue and white" (in Greek, Galanólefki) or the "sky blue and white" (Kyanólefki), is officially recognized by Greece as one of its national symbols and has nine equal horizontal stripes of blue alternating with white. There is a blue canton in the upper hoist-side corner bearing a white cross; the cross symbolizes Eastern Orthodox Christianity, the prevailing religion of Greece. The blazon of the flag is Azure, four bars Argent; on a canton of the field a Greek cross throughout of the second. The official flag ratio is 2:3. The shade of blue used in the flag has varied throughout its history, from light blue to dark blue, the latter being increasingly used since the late 1960s. It was officially adopted by the First National Assembly at Epidaurus on 13 January 1822.

According to Greek tradition, the nine stripes represent the nine syllables of the phrase "Freedom or Death", the five blue stripes for the syllables "Freedom" (Eleftheria) and the four white stripes "Death" (Thanatos). There is also a different theory, that the nine stripes symbolise the nine Muses, the goddesses of art and civilisation.

The white and blue stripes have been interpreted as symbolism of the colours of the sky and sea. All the flags used during the Greek war of independence are exhibited at the National Historical Museum in Athens and in Hydra island.