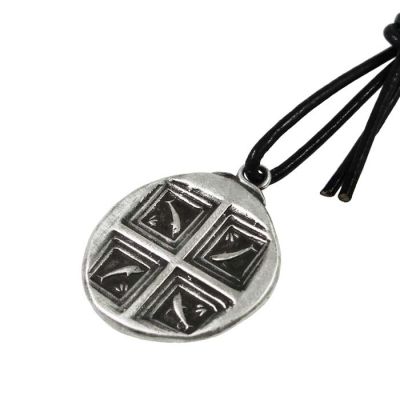 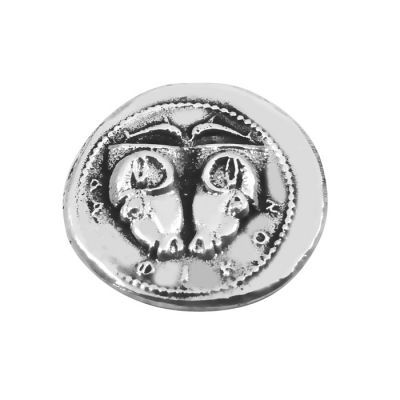 We created a key-ring, inspired by the silver tridrachm of Delphi, dated to 480-475 B.C. The reverse of this coin is decorated with a quadripartite incuse square in the form of a coffered ceiling. Each coffer is decorated with a dolphin. Dolphins are the symbols of luck, friendship, freedom and joy. They represent the death of the past and the rebirth of a new life and form the link between mankind and the magical world of endless sea. The key-ring is crafted by hand, casted in silver 925° and it is attached with black leather on the ring.

The dolphin, was considered as the king of the seas by the ancient Greeks and it was the symbol of Delphinium Apollo and Neptune.

As a symbol of the Olympian gods, it had a special place in ancient art, as a decorative motif. There are two dolphins that adorn the lovely mural in "Akrotiri" in Thera.The mural of dolphins, found in the Queen's Hall in Palace of Knossos, is a very famous monument of the Minoan culture. Dolphins were depicted on vases combined with representations of deities.

The tridrachms of Delphi, minted around 480-475 B.C., are among the most rare of all the Greek coins. The obverse type of the coin shows two rhyta (drinking vessels) in the form of ram’s heads and above them, two dolphins swimming toward each other. The inscription DALPHIKON (ΔAΛΦIKON) is also written in small letters below and the motifs are bordered by a dotted circle.

The ram’s heads are probably a reference to the Greek victory over the Persians at Plataea in 479 B.C, when a great deal of treasure, including silver vessels, was taken as booty by the Greeks. These two rhyta must have been brought as a dedication to Apollo at his temple in Delphi. The designs may also be related to the cult of Apollo. The ram’s head (carnus) was a symbol of Apollo Carnius, which was the god of flocks and herds and the dolphins were associated with the cult of Apollo Delphinius, who assumed the form of a dolphin.

The reverse of this coin is decorated with a quadripartite incuse square in the form of a coffered ceiling. Each coffer is decorated with a dolphin and is supposed to represent the ceiling of the temple of Apollo in Delphi. Ancient coins of Delphi are held at the British Museum in London.