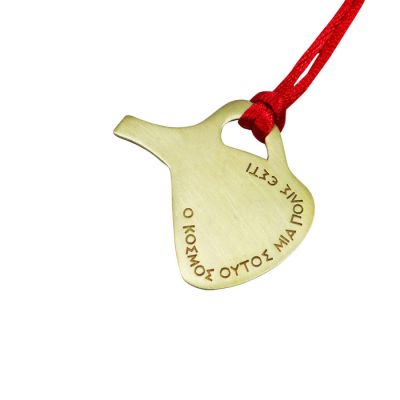 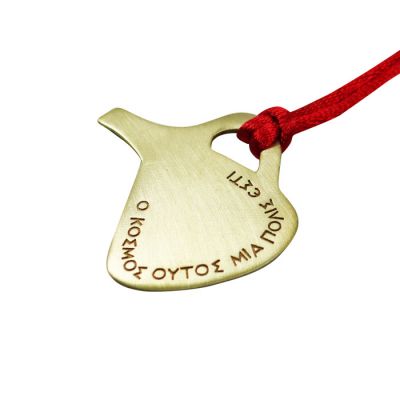 Inspired by the shape and the semantics of an ancient wine jug, we created a key-ring with a toast for Peace engraving the saying of  the famous Greek philosopher Epictetus, 50 AD, "The world of ours is a single city". This characteristic beak-spouted jug, dated around 2700 - 2500 BC, from central Crete, is an example of the Pre-palatial era pottery culture. The key-ring is made of gold-plated 24K brass, and is attached with a red satin cord or black leather to a ring. Just note your preference (red or black) when you place your order in the comments box.

Order it now for you or your loved ones!

This characteristic beak-spouted jug of the Prepalatial period, dated around 2700 - 2500 B.C. comes from Vasiliki near Ierapetra, one of the most important Cretan settlements of the Early Bronze Age. The local pottery style of Vasiliki combines daring tall-necked shapes with a stained decoration obtained by uneven firing of the clay. This jug is made of a light coloured clay and has a large spout resembling a bird's beak. Two plastic disks placed on either side of the handle at the base of the spout recall the bird's eyes, while the overall shape of the body conveys the lively figure of a bird looking upwards. The red flame-like stains on the brown surface were obtained by sticking leaves onto the clay to prevent it from firing evenly.