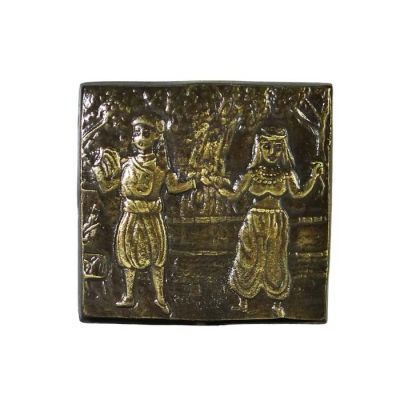 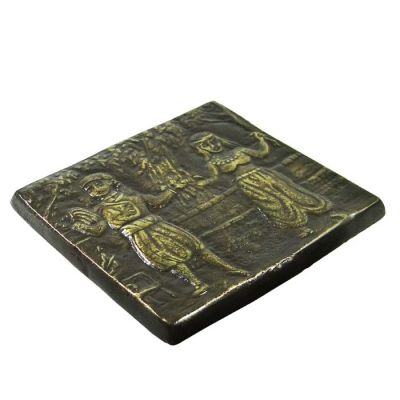 Theophilos Hatzimihail, known simply as Theophilos, from the island of Lesvos is considered one of the most representative Greek popular artist and folk painter of Neo-Hellenic art. The paper-weight is made of brass and it depicts a detail from Theophilos' famous painting, titled "Women from Agiassos, dancing in Karini", dated from 1930. We can also mount the paper-weight on a marble base, creating a unique decoration for your office or home.

Theophilos Hatzimihailor Theophilos Kefalas, known simply as Theophilos, is considered one of the most representative Greek popular artist and folk painter of Neo-Hellenic art. He was born in Lesvos, somewhere near 1970, although his exact birthdate is unknown. During his youth, he decided to visit Smyrne, where he started practicing his art professionally.

In 1897, he went to Volos, where he stayed for thirty years and wondered in the villages that surrounded Pelion, painting constantly and creating his personal pictorial codes. During that period, he created many paintings for the landholder Giannis Kontos. Today, the house of Kontos is the Theophilos Museum.

Sometime near 1926-27, Theophilos returned permanently to his home land. There, having as basis the town of Mytilene, he met Stratis Eleftheriades Tériade in 1928, who originally contributed to the improvement of his living conditions and the recognition of his work. The friendly attitude of Tériade, as well as his financial support, gave Theophilos the convenience to create more than a hundred and twenty paintings within almost six years. These paintings were exhibited in France, in 1936, sparking the public’s admiration and recognition.

The pictures of Theophilos but also his general lifestyle, express his great love and admiration for his country and for anything Hellenic. His artwork depict a great variation of Hellenic subjects, that portray nature and men, as well as, Greek mythology, history and religion.

Artwork and paintings of Theophilosare exhibited at the Theophilos Museum in Lesvos and the House of G.Kontos - Theophilos' Museum in Volos.