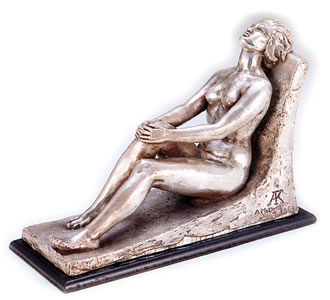 The artist Georgios Kastriotis was born in Athens on June 14, 1899. Life brought him so that the boy whose grandparents' roots were in Athens, could grow up in Paris. There he went to school, making his first statues of plasticine and clay. Good in Mathematics, he enrolled at the School of Engineering in Lausanne. He fell ill and did not finish. So he found himself again for two years in Paris, (1926-1928) which marked the path of his life.

The great French sculptor Antoine Bourdelle, deeply impressed by the talent of the young Greek who did not want to become an engineer but an artist, took him to teach him. Kastriot reverently guarded Bourdel's teachings on the organization of tumors in plastic and the purity of form, lessons that defined his entire enormous work - more than a hundred sculptures - without, however, "overlapping" the personal. his artistic stamp.

By the time he died in December 1969, he had created about 120 works. Examples are the "From the Bones" sculpture in Solomou Square in Zakynthos and the bust of Kennedy in the Kennedy Library in Massachusetts. The main volume of its creation, about 80 sculptures, has been exhibited since 1995 at the Kastrioti Sculpture Gallery of the Municipality of Piraeus.
Project: "Recall"

Philippakis art workshops are very proud to be working with artist, support and promote Greek art and civilization of our country, Greece into the world.