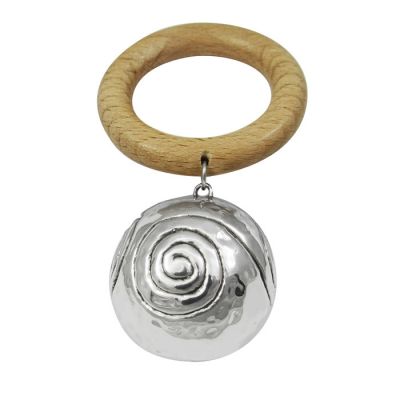 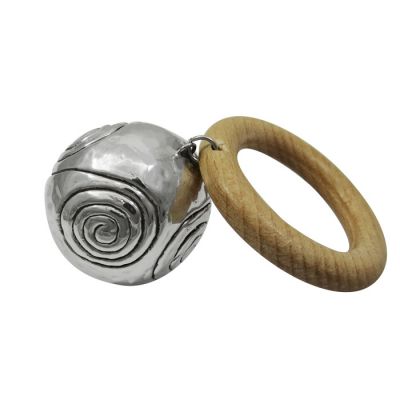 Baby rattle, decorated with a miniature aryballos. The baby rattle is inspired by an aryballoid vase from the Early Cycladic Period (2800 - 2300 BC), adorned with engraved spiral motifs. Aryballoi were used as vials for aromatic oils and perfumes by women and male athletes. They were particularly popular in the Archaic period and the Early Cycladic period and were even exported in South Italy and Sicily. The aryballos is made of silver 999° and is attached to a wooden ring.

Diameter of the aryballos: 4 cm

In ancient Greece, rattles were usually made of clay or metal and varied in shapes. Rattles in the shape of animals, such as pigs and fish, were especially popular. They had pebbles or chickpeas inside them, in order to create a sound.

The rattle was also known as platagi and it was the first toy given to children and newborns, since the sound it made when they shook it stopped them from crying. It was also believed that the sound of the rattle kept away the evil spirits that lay in wait around the baby’s cradle.

An aryballos was a small spherical or globular flask with a narrow neck, solid body - and usually sealed mouth - used in Ancient Greece. Its shape probably came from the oinochoe of the Geometric period of the 9th century BCE, a globe-shaped wine jar. By the Proto-Corinthian period of the following century, it had attained its definitive shape, going from spherical to ovoid to conical, and finally back to spherical. This definitive form has a wide, flat mouth, and a single small handle.

The aryballoid vase usually contained perfume or oil, which was mainly used by women and male athletes. It is often depicted in vase paintings, being used by athletes during bathing. They were usually placed in graves as immitations of larger vases, and occasionally they were used as stoppers on the mouths of piriform vases.

Aryballoi were particularly popular in the Archaic period and the Early Cycladic II period - mainly in Syros phase. The most important centres of production and distribution of such vases were the Cyclades and Corinth. The vases were widely exported all over Greece as well as in South Italy and Sicily.