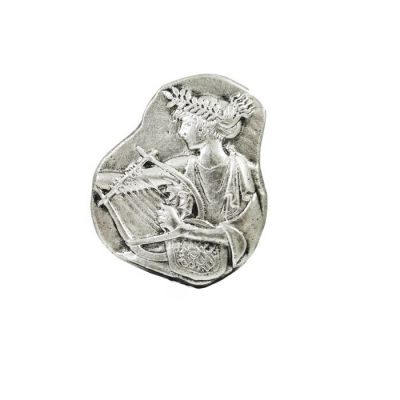 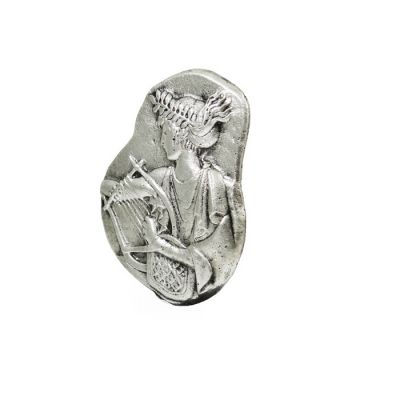 Replica of a tondo on an attic white-ground kylix (vase) from Delphi, depicting a representation of Apollo wearing a laurel or myrtle wreath, holding his lyre in his left hand, attributed to Pistoxenos Painter. It is dated to 480 - 470 B.C. The paper-weight is crafted by hand and is made of bronze, plated in silver solution 999°. Apollo was the patron god of music and arts. The lyre is the most respectable and known of all the musical instruments in ancient Greece and it was closely associated with the worship of god Apollo, Hermes and the nine Muses.

Order now your own copy or offer it as a unique gift.

The lyre is considered the “national” musical instrument of the ancient Greeks. It is the most respectable and known of all the instruments and it was closely associated with the worship of god Apollo, Hermes and the nine Muses. Due to its simple construction and function, the lyre was the main instrument of the musical education of the Greek youths. The lyre was also named "chelys" (tortoise), because its sound box was made from the shell of a tortoise. It appears on greek art towards the end of the 8th century B.C., whereas it is documented with a greater frequency in historic sources and in literature from the 6th century B.C.

The Greeks claimed a Greek origin for the lyre. In greek mythology, the invention of the lyre is attributed  to Hermes at Kyllene of Arcadia. The new-born baby turned the shell of a tortoise into the sound box of the first lyre. He also stole a heard of cows from his brother Apollo and used the intestines of the cows as chords to the lyre. Hermes offered the lyre to Apollo, in order to appease him, when the latter found out about the theft. Hermes also taught the art of the lyre to Orpheus and Amphion, who was the first lyre player of the world.