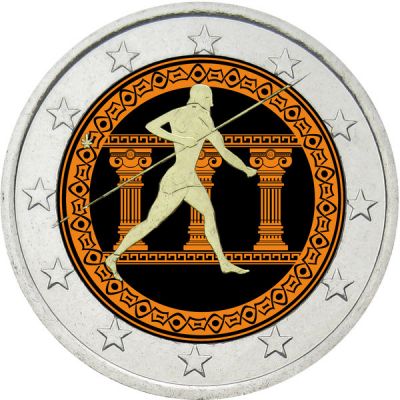 The coin commemorates the 2.500th anniversary of the Battle of Marathon. The centre of the coin shows a synthesis of a shield and a runner/warrior representing the struggle for freedom and the noble ideals that the Battle of Marathon stands for. The bird on the shield symbolises the birth of Western civilisation in its present form.

The Battle of Marathon took place in 490 BC, during the first Persian invasion of Greece. It was fought between the citizens of Athens, aided by Plataea, and a Persian force commanded by Datis and Artaphernes.The battle was the culmination of the first attempt by Persia, under King Darius I, to subjugate Greece. The first Persian invasion was a response to Greek involvement in the Ionian Revolt, when Athens and Eretria had sent a force to support the cities of Ionia in their attempt to overthrow Persian rule. The Athenians and Eretrians had succeeded in capturing and burning Sardis, but they were then forced to retreat with heavy losses. In response to this raid, Darius swore to burn down Athens and Eretria.

Once the Ionian revolt was finally crushed by the Persian victory at the Battle of Lade in 494 BC, Darius began plans to subjugate Greece. In 490 BC, he sent a naval task force under Datis and Artaphernes across the Aegean, to subjugate the Cyclades, and then to make punitive attacks on Athens and Eretrea. The Athenians, joined by a small force from Plataea, marched to Marathon, and succeeded in blocking the two exits from the plain of Marathon.

The Greeks victory at Marathon marked the end of the first Persian invasion of Greece, and the Persian force retreated to Asia. After Darius died, his son Xerxes I restarted the preparations for a second invasion of Greece, which finally began in 480 BC and ended once again in defeat.

The Battle of Marathon proved to the Greeks that the Persians could be beaten.According to historians, is one of history's most famous military engagements. It is also one of the earliest recorded battles.