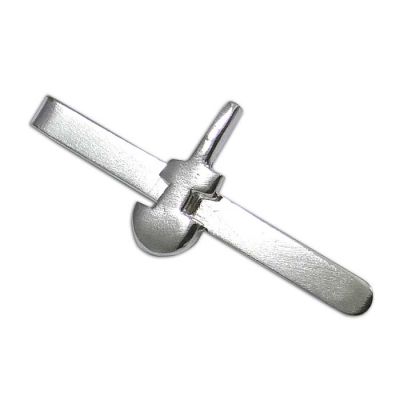 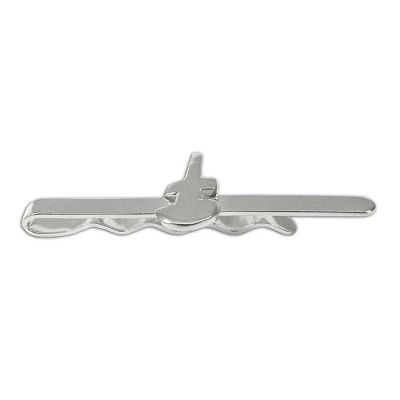 Tie clip with relief design a violin-shaped figurine. The violin-shape figurines are the earliest samples of Cycladic marble sculpture and attribute the shape of female body. The figurine took its name from the violin since it resembles its shape. Early Cycladic I period.

The most common form of figurines is "the folded hands," which attribute to the majority of them, female figures that stand naked with their arms folded in the chest.

Marble figurines are distinguished in three broad categories, in the Schematics, the Physiocratics and the Hybrids. Τhe schematic include, the most simple and small-sized figurines, which are shaped to assume an anthropomorphic outline. The Physiocratic include figurines, in which the natural form of the human form is attempted, while the Hybrids include the intermediate, transitional forms, which combine the characteristics of two types at least.

The Violin-shaped figurines are the most well-known type of schematic figurines and constitute the progression of the Neolithic violin. The head and neck are indicated by a rod-shaped protrusion and the waist with wide notches, so that the outline of the figurine resembles a violin shape. Sometimes breasts or engravings appear, usually in the front and sometimes in the back, in order to show anatomical details such as the base of the neck, the arms, the waist and the spine. The height of the violin-shaped figurines usually ranges from 2.5 to 31.5 cm.

Exhibits of Cycladic Culture, Cycladic Figurines, Violin-shaped figurines and others, exhibited in the Museum of Ancient Cycladic Art, NP Goulandris in Athens.