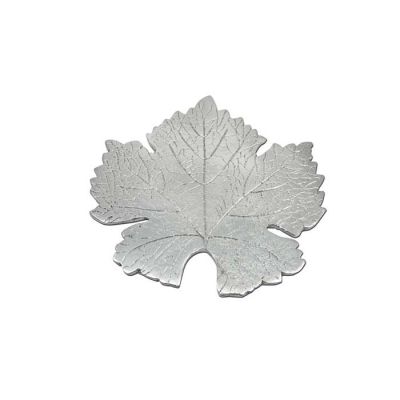 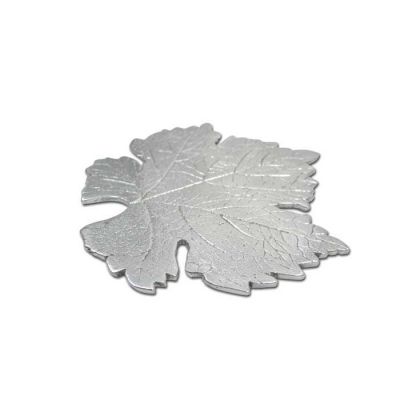 Vine leaf coaster. An idea directly from nature and its' fruits. According to Greek mythology, Staphylos was the son of Dionysus and Ariadne. The first samples of viticulture in Greece have been found in eastern Macedonia (dated back to 3000 BC).The coaster is made of recycled aluminum and the design is an egraved vine leaf. A unique decorative item but also with everyday use in your home or your office.

According to Greek mythology, Staphylos was the son of Dionysus and Ariadne. In another myth Staphylos was the shepherd of the king of Aetolia Oinea. As he nurses his goats, he noticed that one of them eating a particular fruit faded more than the others. Then he gathered many and offered them to his king. He produced a juice he named "wine", and the fruit gave his shepherd's name (grape). According to Klearchos Soleas, the first to discover the art of winery was Maronas, his son Evanthi, whom he honored in Maroneia, Thrace.

The first samples of viticulture in Greece have been found in eastern Macedonia. Near the Krinides of Kavala, grape seeds were found, dating back to the late prehistoric period. Grape seeds have also been found in the excavations at Toumba of Photolibos of Drama (dating back to the Neolithic age), as well as in another excavation near the village of Sitagori Dramas, in an area that was artificially supplied (dated back to 3000 BC). The first wine-growing region in Greece is considered to be the Philippi in eastern Macedonia from the period 2800-2200 BC. Besides, according to a tradition, Dionysus was born on Mount Pangeo and lived there by the Hadon, a Thracian tribe.

Homer refers to the vineyard and wine under the names of wine, Oinoi, winewine and others. Then the Greeks and the Phoenicians transferred vines to the Italian peninsula, and Sicily became a grape production center.