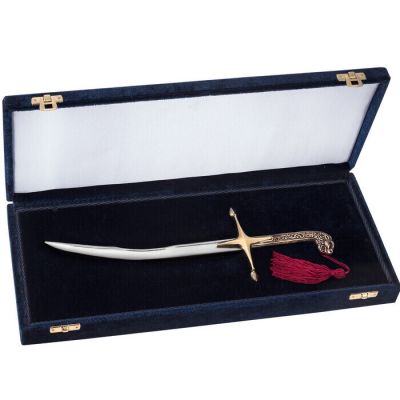 Handmade custom velvet case, specially desinged to place the miniature sword of Theodoros Kolokotronis. It is handmade by experience craftsmen with the old traditional techniques. The velvet case is a unique work of art, made only upon order. The sword is not included in this price. The case is available upon order.

The Themelis family offered important help to the Greeknation, both in the pre-revolutionary period, and during the War of Independence. In particular, Demetrios Themelis, who was an ardent apostle of the Filiki Eteria (Society of Friends) and the official attaché of Demetrios Ypsilantis, upon his arrival at Peloponnese in 1821, contributed greatly to the War of Independence, for the purposes of which, he offered his whole property.