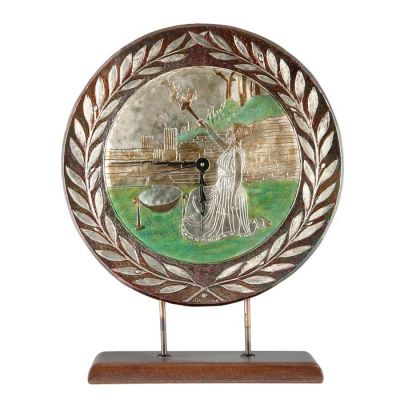 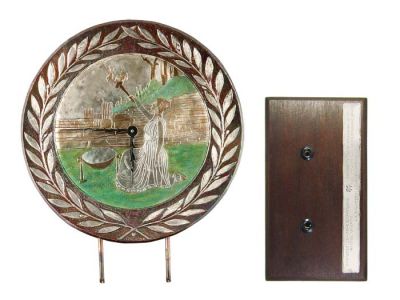 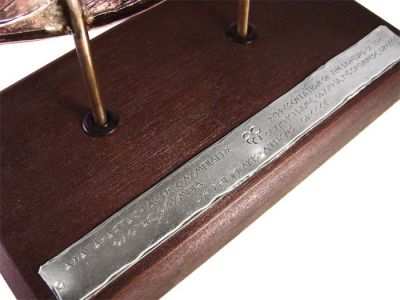 The Lighting of the Olympic Flame, wich was one of the most important symbols of the Olympic Games. The unique ancient ritual took place at the Heraion in ancient Olympia since the first ancient OLympics in 776 B.C. and it re-enacted the theft of fire from the Greek god Zeus by Prometheus. In the modern Olympics, the first lighting took place in 1928. An aesthetic round clock, made of copper with oxidation and partial silver-plating in silver solution 999°. The unique clock has embossed depiction of the ritual and the kotinos, the prize of the ancient Olympic Games, and stands on a wooden base. A clock with historical significance, for your office or your home decoration.

Diameter of the clock: 24cm

Order now yours or offer it as a special gift.

The Olympic flame is a symbol of the Olympic Games. It is the ceremonial re-enactment of the theft of fire from the Greek god Zeus by Prometheus. Its origins lie in ancient Greece, when a sacred flame was lit from the sun's rays in Olympia and it kept burning during the celebrations of the ancient Olympics.

In the modern Olympics, the first lighting of the flame took place in 1928 for the Amsterdam Games, while the torch relay was introduced at the summer Olympic Games in Berlin in 1936. The lighting of the Olympic flame is held in Ancient Olympia. According to the ritual, the High Priestess proceeds to the lighting at the Temple of Hera (Heraion) which is opposite to the Temple of Zeus, at the archaeological site of Olympia.There, she calls the God of Sun Apollo to help her light the torch, making a prayer.

The ritual is held at the archaeological site of Olympia, in Peloponnese.