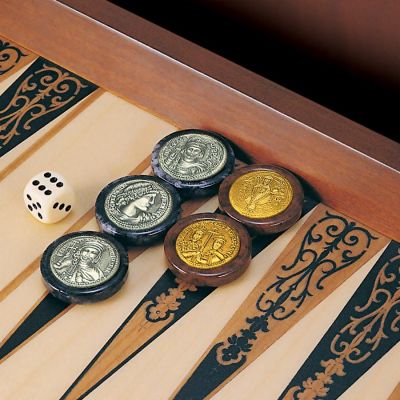 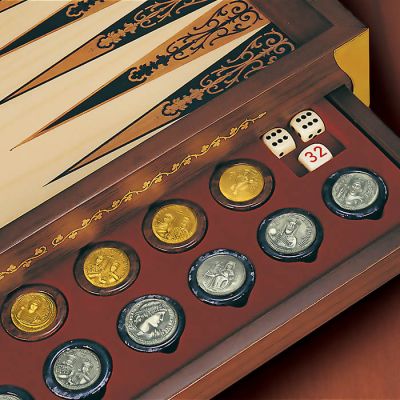 A luxurious collectible backgammon with gold and silver draughts.
The ancient game of Backgammon preserved and handed down to us by the Byzantines and the radiance of the Byzantine Emperors were the source of inspiration for this unprecedented collection. The 30 numismatic draughts, pieces of art and palpable historic elements, feature the austere and noble figures of 15 Byzantine Emperors, as they were depicted on authentic Byzantine coins struck by the top mints throughout the Byzantine Empire.
The wax models were expertly crafted by hand and the coins are casted in precious metals, silver 925 and silver 925 with 24-carat gold overlay(vermeil). The base of each draught, in black and light brown alabaster, is also handmade.
The masterly crafted board, is offered free of charge. Its surface is embellished with tradition Byzantine eagle emblem of the Byzantine Empire. The board comes with two storage point in its sides, to collect the draughts and the 2 pairs of dice, offered free of charge. Here is an exceptional opportunity to acquire a unique collectible item for display or for enjoying an ancient game with style. The production is limited so you have to pre-order so not risk missing your collectible backgammon!
This collectible item is only available upon order. In case of interest contact us by mail at info@museummasters.gr.

Installment Settlement: The possibility of installment settlement with partial deliveries is offered, after telephone contact.
All our works are handmade and are accompanied by a certificate of guarantee and authenticity.
Estimated delivery time: Upon your order you will be informed about availability and delivery time.
Concept- Design - Editing: Dorit Meir

The Byzantine Empire was the predominantly Greek-speaking continuation of the eastern half of the Roman Empire and it was founded in 330 B.C.. Its capital city was Constantinople. The Empire became a center of culture, development and trade in the eastern world, untilthe fall of Constantinople by the Ottoman Turks in 1453. The borders of the Empire changed several times in its long history and stretched from the Italian peninsula, the Balkans, Asia minor, Syria, Palestine, Egypt to a small part of the Iberian Peninsula.

The history of Byzantine coins considered that started in the reign of Anastasius I Dicorus (491-518). The front side of the gold coins, usually depicted portraits of emperors inbody armor, holding a cross in the hand or with a cross depicted on the helmet. The bust of Christ was frequently depicted. From the 10th century, the cross brought a round bas-relief portrait of the emperor. Busts and inscriptions were originally depicted on the silver coins. The inscriptions were originally in Latin, but in late 8th century the Greek language started to be used.

Byzantine coins are kept at the Museum of Byzantine Culture at Thessaloniki, the Byzantine and Christian Museum and the Numismatic Museum in Athens.