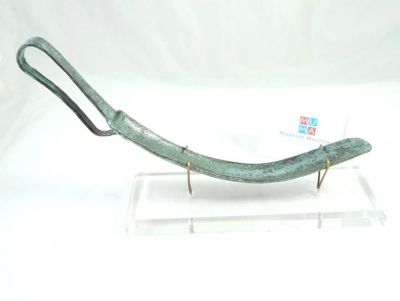 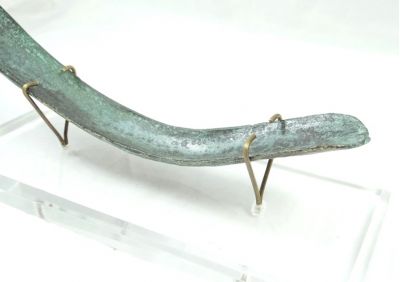 The Strigil (stleggis / stlegida) was an object used by athletes in Greek and Roman times. It helped to remove sweat, dust and oil from the body of the athlete, especially after the sport events. In ancient Greece, it was used by both men and women, as it was purely hygienic. For their construction, various materials were used, most commonly iron and mainly copper, and the owner's or the manufacturer's name was often engraved on the handle. Stigils have been used extensively in ancient Greek sports since the beginning of the 6th century B.C. until the late Roman era. Handmade copy in solid brass with natural patina on an acrylic base.

The strigil (stlengis) was an item designed and used for hygiene reasons in ancient Greece, both for men and women. Its was mainly used during Greek and Roman times by the athletes, to remove sweat, dust and oil from the body especially after the sport events. The original shape was slightly curved convex, as a knife (not edged) with a round handle on the top. They used it along the body parts to clean the skin. It was mainly made of iron and copper and was often engraved on the handle with the name of the owner or manufacturer. According to Plinio (Roman author and physic philosopher 23-79 AD) besides its use as "abrasive" in the bath, it also aimed at the treatment of joint pain due to induced hyperemia. Strigils are depicted in several clay models and sculptures such as the "Apoxyomenos" of Lysippos. Around the fourth century, strigils are being depicted in other types of artwork, such as, skyphos (vessel), and statues. Strigils were used in Greek sports from the early 6th century. B.C. to the late Roman era.

Strigils were not only used as tools for cleansing, they were also a common offering given to the deceased during burial. In three graves from Greece in the 3ed century B.C. which contained adult males, all had iron strigils with them.

Original finds can be seen in Athens, at the National Archaeological Museum, the Cycladic Art Goulandris Museum and at the Metropolitan Museum of Art in New York.