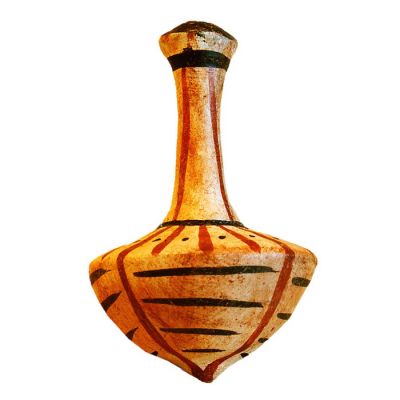 Since ancient times, the game has played an important role in Greek society. It was part of children's everyday life, but also a way of relaxing adults. At the same time it helped thousands of children overcome their difficulties and their problems. The ancient Greeks had the game as a means of self-treatment, so they gave great importance to its role.

Spinners (strovili, ancient Greek) were among the most popular games of children and young women, as shown on vase representations. The protector of children's toys, Hermes has also been immortalized to enjoy this game. Spinners were known from prehistoric times, but have been particularly popular since the Archaic times. They were made of wood or clay. Some were decorated with ivy leaves, flowers and animals.

Several types of spinners are saved and perhaps this justifies the alternative ancient names, such as, cone, rhombus etc. probably according to their shape. There were plain discs with a hole in the center to fix a small swinging stick or diskforms with a conical swinging in the middle are some of the simpler versions. Most common, however, was the cylindrical type with a sharp edge.

The spinner was wrapped with a thread or string, from the bottom, where there was a half of a nail, and the winding continued to the middle of the spinner, where it was considered the best winding and had the best performance. The spinning rope spinner took a lot of turns for a long time. The use of small metallic elements added sound made the game more entertaining.

The earliest reference to the spinner is made in the Iliad where Homer compares the rotation of a stone that Aias the Telamonios hits with the characteristic movement of the spinner before it stops spinning. Although, most of the tops were made of wood, brass or clay, ceramic spinners were also found in the excavations of Troy.

Spinners are exhibited in the National Archaeological Museum of Athens.