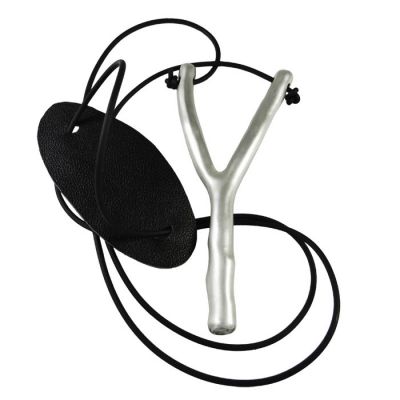 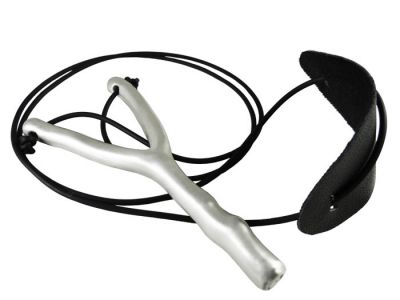 A pendant with a sphendone (sling), inspired by the ancient toy and weapon, which was used in warfare and in hunting in antiquity. In ancient Greece, the sphendone was a strap of fabric with a small cradle in the middle. Nowadays, the sling is a toy, that is reminiscent of the ancient weapon and usually consists of a bifurcated wood that holds the strap. The sphendone is made by the artist El Phil (Eleftherios A. Philippakis) and is created by an actual piece of wood, coated in silver 999°. The pendant is offered with a black natural rubber cord.

The sphendone (sling) is a strap that is made by rope, leather or fabric, with a small cradle in the middle, that is used as a weapon and it is known since antiquity. Nowadays, the sling is strongly reminiscent of the ancient murder weapon but usually consists of a bifurcated wood that holds the strap. The sling is considered to be used by humans as early as the 7th Millennium B.C.. The sling is mentioned in the Bible, in the battle between Goliath and David, who slew Goliath with a shot from his sling.

In antiquity, the use of the sling was quite prevalent in warfare, but also in hunting. The ancient Greek authors indicated that among the nations that had a long tradition in specialists slingers were the Achaeans, Aetolians, Argives, Persians, Rhodians, Sicilians, Syrians, Thessalians and Thracians and that most of them were lower in status. In ancient Greece, the slingers were lightly armed and they usually stood in front of the phalanx in order to manage a direct blow to the enemy.

Sling bullets are kept at the Archaeological Museum in Kythera.