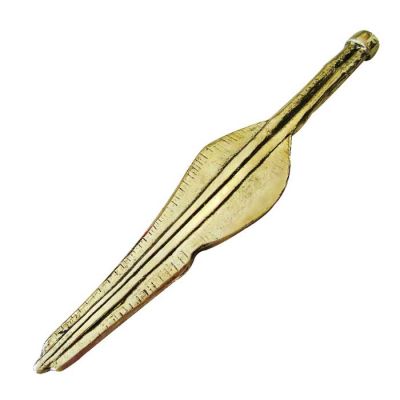 The spears, one of the most popular weapons in ancient Greece, influenced us to create a copy of a spearhead, that was discovered in the Ancient Olympia, which can be used as a letter opener, as well. A unique historical item, made out of brass, for collectors and a magnificent piece to decorate your office.

The offerings of cities from booty taken in victorious campaigns, or of individuals from their personal panoplies are not only tangible and incontestable evidence of actual historic events, thanks to the inscriptions so often engraved upon them, they enlarge our knowledge of the art of war as practised by the ancient Greeks. In addition, their decoration makes a rich contribution to the depiction of myths, and many possess particular artistic merit.

A spear or a dory was the chief armament of hoplites (heavy infantry) in ancient Greece and it was a pole weapon consisting of a shaft, usually of wood, with a pointed head and a butt-spike. The head was simply the sharpened end of the shaft itself, or it could be made of a more durable material fastened to the shaft, such as iron, steel, copper or bronze. The most common design for combat spears since ancient times has incorporated a metal spearhead shaped like a triangle or leaf. Like many weapons, a spear was a symbol of power.

The spear is the main weapon of the warriors of Homer's Iliad. In classical Greek mythology, Zeus' bolts of lightning may be interpreted as a symbolic spear. Also, Athena was depicted with a spear.