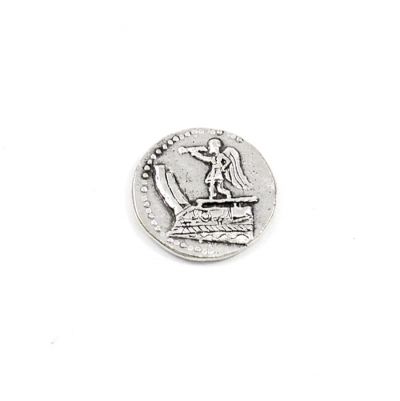 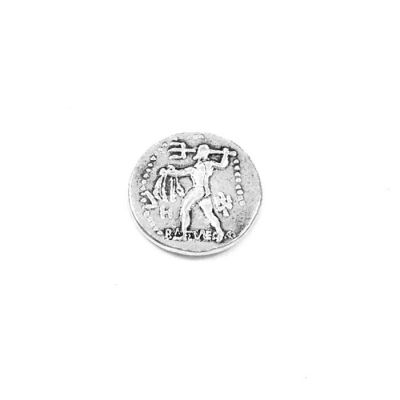 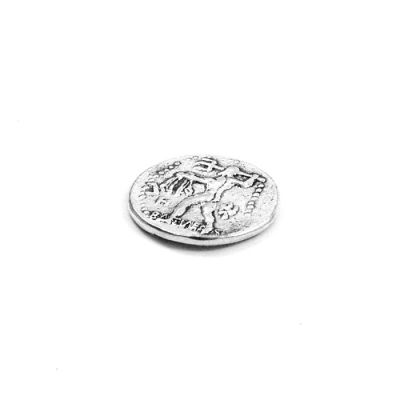 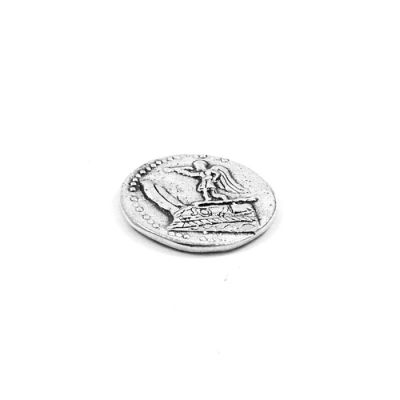 Silver tetradrachm King Dimitriou. This coin bares on the front side the Goddess of Victory on a ship's bow and on back Poseidon holding a trident with the inscription VASILEOS DIMITRIOU (king Dimitrios). The copy of this specific coin casted in solid brass, silver-plated and placed in a specially designed acrylic case in order to be able to exhibit both sides. It dates around 300-295 B.C. Macedonia, Greece.

Macedonia was one of the first regions of Greece that adopted the currency. This was largely due to the existence of silver and gold mines in the same area. Pangeo, eastern Halkidiki, the Tillers Material (northeast of Kavala), the Philippi area, the river Echedoros and Thassos was the great mining centers with their wealth supported the economy of the Macedonian state and the power of the Macedonian kings. Moreover, direct relations and the temporary subjugation of the region in the Persian empire by paying high taxes, and trade with the Mediterranean market, contributing in turn to the early adoption of the currency.

The mintage in Macedonia began around 525-510 BC. The "Thraco" nations and some cities, including Vergi, the Aineia the Mende, Potidea, Skioni and Acanthus, utter the first silver coins of the region. At the beginning of the 5th century BC almost every city engages in the cutting of its own currency while royal publishing begins.

The iconography of the coins in Macedonia stems mainly from the religious and mythological tradition. Gods and heroes are engraved on coins, sometimes their own and sometimes their symbols, providing information on local cults and traditions. The source of inspiration is also the flora and fauna. Domestic products, which are a source of wealth and prosperity for a city, often stamp their publications, such as the vineyard in Mendes' coins, which refers to the cultivation of vineyards.

To the right, an ax, to the left a monogram.
Mint: Salamis of Cyprus