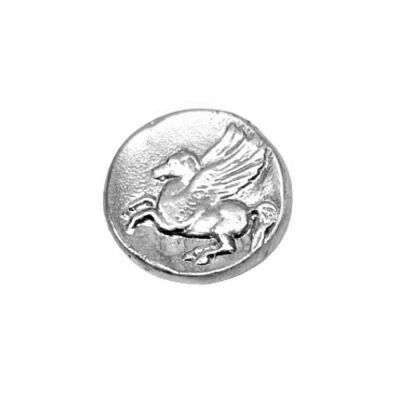 Corinthian silver stater coin replica in solid brass silver-plated with 999° silver solution. The replica is housed in an acrylic case to showcase both sides of the coin. The stater of ancient Corinth depicts Pegasus on one side and Athena on the other side wearing a Corinthian helmet. The letter Q (Coppa) distinguished on the original coins under the forelegs of Pegasus, was the Doric pronunciation and writing of the letter Kappa, and is the first letter of the word CORINTHIANS.

Diameter of the coin: 2 cm

The stater was an ancient coin, known mainly as the main currency of northern Greece and, specifically, of ancient Macedonia. However, staters were cut and circulated in ancient Greece from the 8th century BC. in many of its regions, with the more widely known Aeginetan, Attic, Euboic, Corinthian and much later (because Macedonia did not initially have a particularly developed trade) Macedonian. Staters were then introduced to western Europe by the Celts, when they imitated the Macedonian stater, which they met while serving as mercenaries in the army of Philip II of Macedonia. Stateris in Greece is also called a kind of scale, the stateri (in Corfu) or statseri or kantari. Finally, the stater, in addition to being a coin, was also a unit of weight or mass. In the last century in Greece, a stater or kantari corresponded to 44 okades.
Area:
Corinth
Date:
480 - 470 B.C.
Details:
with acrylic case
Dimensions (WxHxD):
5 cm x 6 cm x 5 cm
Gross Weight:
150 gr
Includes:
Gift packaging - Description Greek & English
Material:
Silver-plated Brass
Subcategory:
Ancient hellenic (greek) coin
Weight:
60 gr