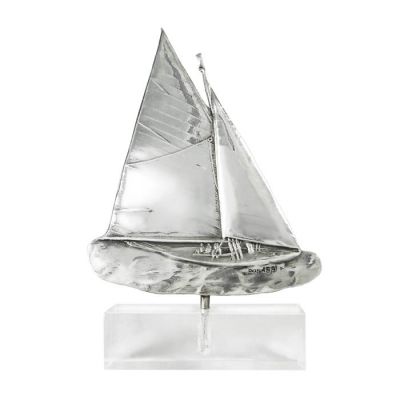 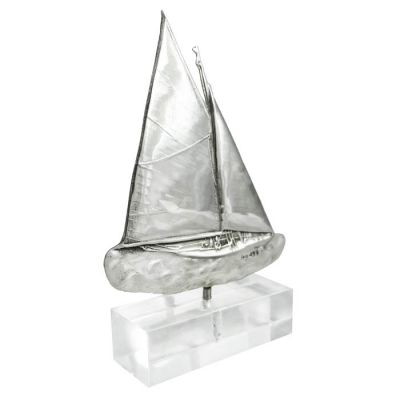 The sailing yachts are large wind-powered vessels, on which the control of the ship's movement is achieved with large fabric foils called sails. The sailing ships were used, from antiquity until the use of the steamships on seafaring, in warfare and in trade, as well. This unique miniature ship is inspired by an embossed representation of a ship on a handmade candy box, made of glass, dated to 1924. It is made of silver 999° and is mounted on an acrylic base.

A sailing ship is a type of a large vessel that is wind-powered and the control of the ship's movement is achieved with large (usually fabric) foils called sails. It is speculated that the sailboats were devised, in antiquity, by the Athenian engineer Daedalus. From antiquity to the middle ages, the development of the sailing ship was very slow, as ships were mainly used oars and the sail had only an auxiliary role, which could be used only in a favourable wind. Sailing ships were divided into one-masted, two-masted and in three-masted ships, and sailing ships that had up to seven masts.

During the 14th and 15th century, large sails called latinia, that hung on the keel of the ship, started to be used in slow-moving sailing boats such as the galeone, the latini and the caravel. Later, sailing ships with sails that were mounted on vertical antennas in the keel of the boat appeared, such as the frigate and the brig.Sailing ships were used in warfare and in trade. More precisely, in the battle of Lepanto, the sailing ships were established as warships.

Ship models are kept at the Hydra Museum - Historical Archives, in the island of Hydra and at the Museum of Maritime Tradition and Sponge Fishing of Nea Koutali, in Lemnos.