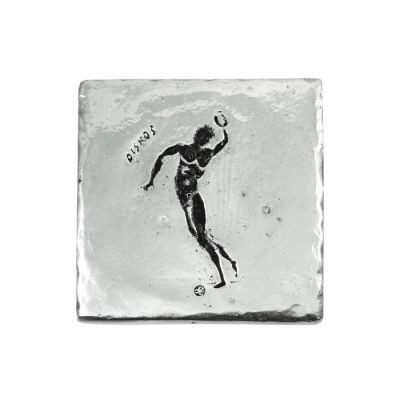 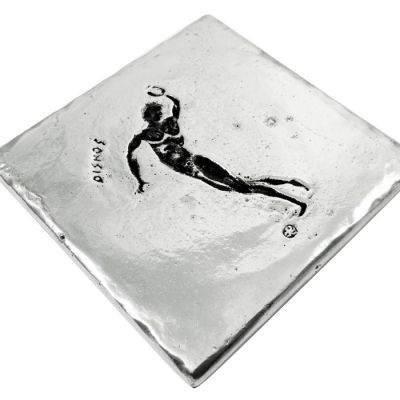 Pentathlon is a sport feature of the ancient Olympic Games, which consists of five sports. In the Iliad, Homer mentions Discus as a sport when Achilles held the games in honor of his dead friend Patroclus. In Homer the sport of discus was called "solos". It was introduced in the Olympic Games of 708 B.C, in the 18th Olympiad. We created for you, a collection of coasters with depictions of ancient sports and events of the Olympic Games, inspired from the depictions of the sports in ancient black-figure vases. The coaster is made of recycled aluminum of the depiction of the sport. A unique artwork with everyday use.

The discus throw is a track and field event in which an athlete throws a heavy disc, called a discus, in an attempt to mark a farther distance than his competitors. The sport of discus throwing dates back to ancient Greece, where the sport was prized for its display of an athlete’s precision and coordination, combined with his physical strength. Discus was one of the earliest games played in the Olympiad, along with other similar sports, such as the javelin. In art, the sport was the subject of a number of well-known ancient Greek statues, such as the Discobolus.

Discus throwing emerged in ancient Greece around 708 B.C., when the sport was added to the 18th Olympiad and it was the first element in the pentathlon, which also included jumping, wrestling, running and javelin. Shaped like a flying saucer, the ancient Greeks made discuses from lead, bronze, iron or stone. The discuses were made in varying weights, depending on whether the competitions consisted of men or boys. Discus was one of the events that didn't have a connection to military weapons in war, but it had a reputation for being an instrument of accidental death in mythology.

The technique used to throw a discus at the ancient Olympics is much the same as it is today. Officials marked a legal throw with wooden pegs and measured the distance with rods. Little is known of the distances achieved in antiquity. However, the ancient technique of discus-throwing may have been rather different. There is no evidence for anything more than a three-quarter turn, rather than the two and a half turns used today, and this may be one factor making a direct comparison difficult.

It was traditional for a discus thrower at the Olympics to present his discus to sanctuary officials after having it inscribed and dedicated to a god. Unlike today's discus competitor who throws from within a circumscribed circle, the contestant in the ancient Olympics stood inside an area called the balbis, marked off by three lines. The thrower could not step over the lines to either side, or across the line in front of him. Within the balbis, he was permitted freedom, but if he stepped outside of any of the three lines while making his throw, he was immediately disqualified.