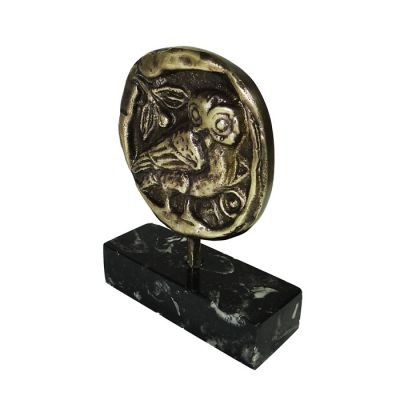 The owl was the symbol of wisdom in Ancient Greece and the sacred bird of Goddess Athena. The bird was also called glaux. In Ancient Athens, the reverse side of the tetradrachm of Athens, also known as the athenian glaux, depicted an owl and an olive branch with an inscription (ΑΘΕ). Inspired by the ancient coin, we created a brass relief represntation.

The most common depiction of the owl is on the silver tetradrachm of Athens (449-419 BC), which was the most widely used coin throughout Greece in the heyday of Athens in the 5th BC century. It was used in trade throughout the Greek world. The ancient Athenians chose on the obverse of the coin to depict the owl (glauka) with an olive branch and the inscription ΑΘΕ. This coin was better known simply, as the Athenian owl (glaux).