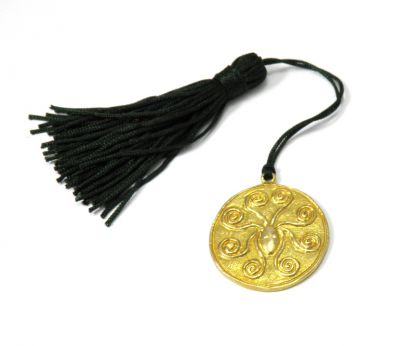 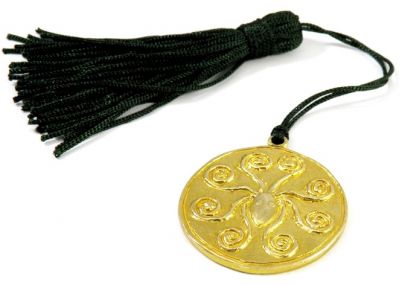 The Octopus Charm comes from a Mycenaean golden hair decoration (which is kept in the National Archaeological Museum of Athens). An ancient jewel used for hair decoration depicting an octapus with spirals on the end of its tentacles.  Spirals are depicted almost on all aspects of every day life of the ancient Greeks. Walls, floors, decorative items, utensils, jewelry for 3000 years now... bear spirals! The spiral symbolizes the creation of life and is a symbol of Vital Force. It also symbolizes Birth, Continuity, Wandering, Dance, Existence and the Return in the Center. Which clearly means the Recovering of Stength!

The charms even in the ancient times were used as symbols of good luck and protection and that is why today we tend to identify them with the coming of the new year and the hopes to bring good fortune to our lives. It is a symbolic gesture that shows our appreciation to whoever is given as a gift. We continue to enrich our charm collection with gift proposals desinged in a minimalist approach to satisfy the most demanding tastes.

All our collection of charms. You can also order it as a key-ring.

The spiral is one of the oldest symbols and it was used since the Stone Age in Greece. It is one of the strongest and historic symbols of the ancient Greek civilization and it declared the Greek origin of all things that bear it, especially before the classic period of the gold century and beyond.

It symbolizes the creation of life and it is considered a symbol of Vital Force. It also symbolizes Birth, Continuity, Wandering, Dance, Existence, Return in the Center. The knitting of the web of life and the veil of Mother Goddess. Recover Strengths!

The spiral is unwound through myths, religious beliefs and legends. It is etched on rocks and in prehistoric megalithic monuments. The ancient Greeks were aware of the great mystical meaning of the spiral, so they drew it everywhere. From the temples and the shields of warriors, the depiction of the hairstyle on the gorgeous head of the Kouros statues, and on the ornament for the ancient women's hair and jewelry. It has been found painted on frescos in ancient Thera and also on many vessels from the Minoan age that were discovered in Crete and Santorini islands in the Aegean Sea.

The spiral has been used in the objects of Greek civilization since ancient times. From the 16th century. BC, when the above-mentioned Mycenaean golden decoration (which is kept in the National Archaeological Museum of Athens), the coils decorated the objects of everyday use of the Greek people, proving its historical and cultural continuity. The traditional clothes of Northern Evia have a very strong element. The primitive spirals embellish the segunas in wonderful designs, decorate the aprons in elaborate combinations and conceal behind them their profound symbolic message which is still the same for 3000 years ...