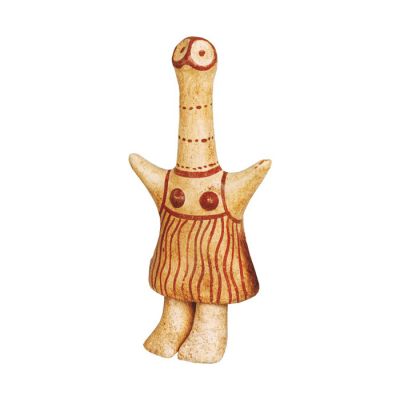 The doll (plagona) is one of the most diachronic and widespread game in the world. In ancient Greece, the dolls were the favourite toys of children and they were made of wax, wood, ivory but, mostly, of clay. They depicted women with varied hair styles and painted clothes, like the mycenaean dolls, although they occasionally wore dresses and hair made of fabric. Various types of dolls existed, with various names such as, idols, plangons, nymphs, kores (daughters) and puppets (in greek nevrospasto).

At first, the front part of the doll was made in a mould, while the back of the figurine was flat. Initially, these figurines were considered as religious idols, but with the passage of time, it developed into a child's toy. Another type of the dolls were the nevrospasta, which had articulated arms and legs, that were joined to the torso with string or wire and were moveable. The puppets (nevrospasta) were the most common toys and they were probably the precursor of the mechanic doll.

Those who modelled figurines of dolls were known in ancient Greece as “Koroplastis” (daughter modeler). They often created a tiny hole at the top of the head, that was used for dangling the figurine from a string, as if dancing. Plangons are one of the rare finds that were discovered in ancient tombs and these inform us about the kids’ toys and its role in antiquity. The dolls introduced the young female population to the role destined for them, to be good wives. More specifically, before marriage, girls dedicated their dolls along with their other games and a lock of their hair to the goddesses Artemis, who protected transitions in human life and helped couples to conceive, and Aphrodite, who safeguarded love and fertility, as a passage to adulthood.

Dolls were frequently found in children graves, while relevant representations of children holding similar dolls are encountered on grave columns, especially in Attica. These findings amplify the religious role of the dolls. Such figurines also had a cultic function, as they were also discovered in sanctuaries.