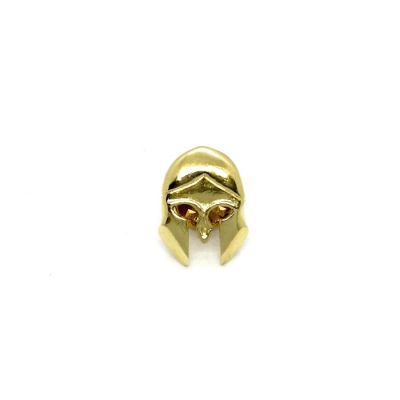 Bronze helmets were the main proteciton of worriors in ancient times. Inspired by the helmet of Leonidas we created this pin to celebrate the battle of Thermopylae. Many cities in ancient Greece claimed their origin. The most known craftsmen came from Corinth in Peloponnese. The pin is handmade of solid brass.

The Battle of Thermopylae took place in 480 BC. between the Greeks and the Persians, during the second Persian invasion of Greece.

Ten years earlier the Persians had lost in Marathon. So they prepared a second campaign led by Xerxes. Themistocles - Athenian politician and general - persuaded the Greeks to close the straits of Thermopylae and Artemisio. The Persians, with an army of millions of men and a hundred to three hundred thousand men, reached the straits in early September.

The Persians attacked after four days of waiting. The Greeks resisted for two days. On the third day, however, Nightmare led the Persians behind the Greeks. When he learned this, the Lacedaemonian king Leonidas (of the Agiades) released the allied forces and organized a new defense of the Greeks further south, keeping with him at the Gates only select and voluntary forces, in addition to the legendary 300 Spartans. In other words, he had 900 to 1000 Lacedaemonians from the area, perhaps together with Helots, 400 Thebans and 700 Thespians led by Demophilos, son of Diadromos.

The Persians destroyed all the power left on the battlefield. The Greek fleet, after learning the news, decided to leave Artemisio and retreat to Salamis, where it later achieved a significant victory. The Persians retreated completely after the battles of Plataea and Mykali.

The battle of Thermopylae is one of the most important battles in Greek and world history. But mainly from a moral point of view, it is a shining example of self-denial, self-sacrifice and obedience to the homeland. The battle showed the advantages of the Spartans' military training, better equipment and clever use of ground configuration.