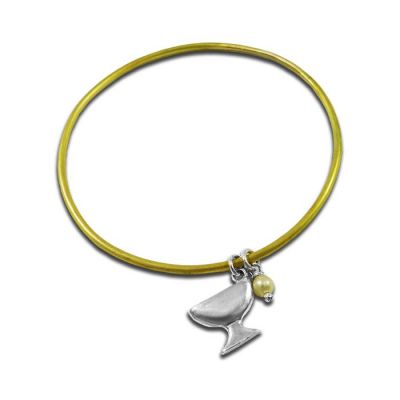 Κylix bracelet with white pearl. The kylix (kylika) is a common type of vessel and there are several types. Τhe kylix was a kind of cup in ancient Greece, which was mainly used to drink wine. It dates back to the Early Cycladic period 2800-2300 BC. A fine gift for women and for our little ladies as well.

Solid Silver 925° figurine copy with a pearl attached on a brass bracelet.

The art of the stone was developed during the Bronze Age . Stones were used in a wide variety of colors, marbles, pebbles, alabaster, steatites and others and many earthenware art was made, like pots, vessels and many small objects. The kylix (kylika) is a common type of vessel of the Early Cycladic period 2800-2300 BC. and there are several variants with vertical or curved walls.

Τhe kylix (kylika) was a kind of cup in ancient Greece, which was mainly used to drink wine. They were wide and shallow cups, plain or with two handles placed diametrically on their rim and foot that ended in a slightly hollow trumpet-shaped base. Their bottom was almost flat and that was the main surface for painting. The kylix (kylika) emerged in the 6th century BC. and were particularly used in the classical period, but later in the Hellenistic years they began to be replaced by the Skyphos.

It was one of the most popular cups and was used mainly in banquets. The hosts often ordered them from ceramics and vase artists with specific representations. Kylix was spread over the Greek borders and was one of the products that were exported to other people, especially to the Etruscans.

The kylix besides its practical use, it was also found in graves and their particularly fine processing combined with the frequent presence of red, blue or green in their interior seems to suggest a ritualistic operation as well.

You can see original findings at the Museum of Ancient Cycladic Art, N.P. Goulandris and at the Archaeological Museum of the Ancient Agora in Athens, Greece.