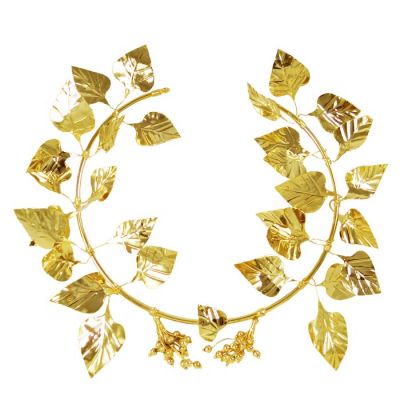 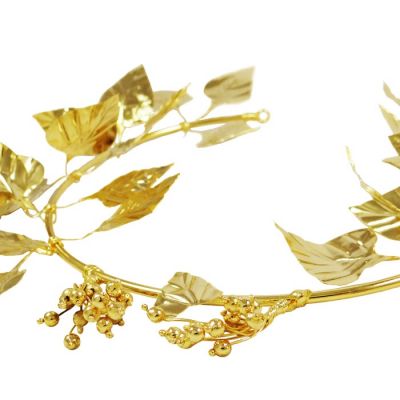 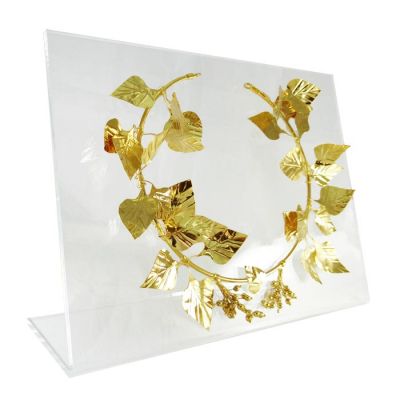 Ivy wreath from Kastelorizo island in Greece. We created an ivy wreath, inspired by the original wreath,which was found in gold from Kastelorizo, dating to the late 4th - early 3rd century B.C.. The wreath is made of gold-plated 24K copper, mounted on an acrylic stand (back).

A wreath is an assortment of flowers, leaves and twigs, that is constructed in the shape of a ring. In antiquity, wreaths were used in ceremonial events and rituals. Wreaths have much history and symbolism associated with them. They symbolized strength and were made mainly by sacred trees and plants, such as the olive tree, the myrtle tree and the ivy.

Wreaths were a design used in ancient times in Ancient Greece and Rome. They were used as jewelry, made of gold or other precious metals. In the Greco-Roman world, wreaths were used as an adornment that could represent a person’s occupation, their achievements and social status. It was used as a headdress, made from leaves, flowers and branches. Wreaths originally were made for use with pagan rituals in Europe, and were associated with the changing seasons and fertility. In greek mythology, satyrs were depicted sometimes, wearing ivy wreaths.

This golden wreath is from the island of Kastelorizo in Greece. Golden wreaths are exhibited at the National Archaeological Museum in Athens.