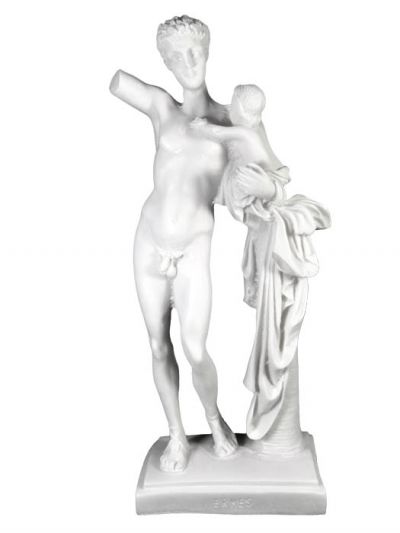 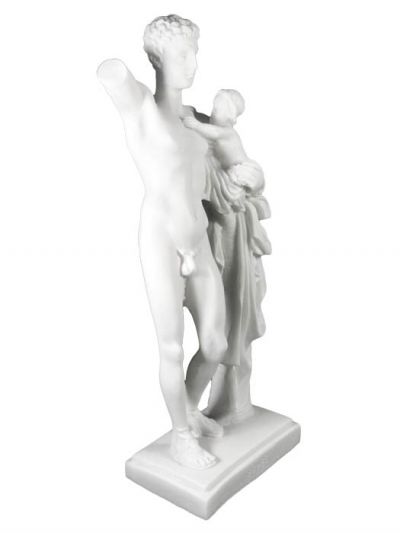 Hermes of Praxiteles, also known as Hermes and the Infant Dionysus, is a unique sculpture, depicting the messenger of the Olympian gods and the god of wine, as a baby. The original statue, made by the ancient sculptor Praxiteles, was found in the ruins of the Temple of Hera at Olympia in 1877 and dates back to 4th century B.C. Our handmade statue is made of casted alabaster.

Hermes of Praxiteles, also known as Hermes and the Infant Dionysos, is an ancient Greek sculpture, depicting Hermes, the messenger of the gods, and the infant Dionysus, the god of wine. The statue was discovered in 1877 in the ruins of the Temple of Hera at Olympia and it is made of Parian marble. It isattributed to Praxiteles and dated around the 4th century B.C.. Praxiteles was one of the prominent sculptors in the Late Classical period in Greece.

Like all the sculptors of this era, in his sculptures, he mostly used to depict the gods and goddesses of the Greek pantheon. The sculpture shows Hermes resting in the trunk of a tree, while the baby is trying to take something from his hand. While Hermes' right arm is missing today, originally it would have probably held a bunch of grapes, taunting the infant. As the myth suggests, Zeus ordered Hermes, his messenger, to hide the newborn from his wife Hera and take him to the nymphs in Crete.

Hermes of Praxiteles is displayed at the Archaeological Museum in Olympia.