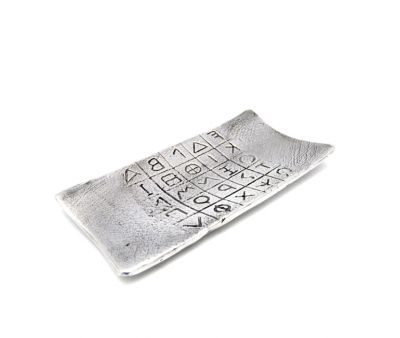 Ashtray in the shape of an ancient Cycladic rectangular flat palette, with engraved letters of the Greek alphabetic script. The Greek alphabetic script is a left writing system, dating to 8th - 7th century B.C. The letters on the ashtray are inspired by local variants of the greek alphabet, which were used in Peloponnese, Central Greece, Thessaly, Attica, the islands of the Aegean and from the cities of Ionia. Cycladic rectangular flat palettes propably served as surfaces for color mixing, since such vases were often found along with trimmers.

You may also see, the letter opener and the paper weight.