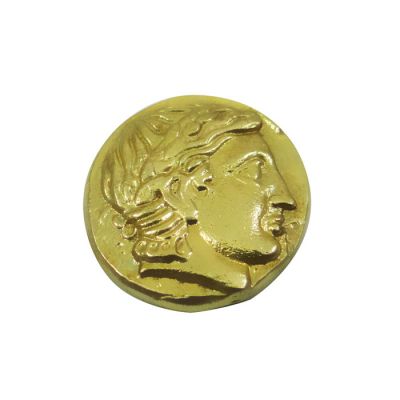 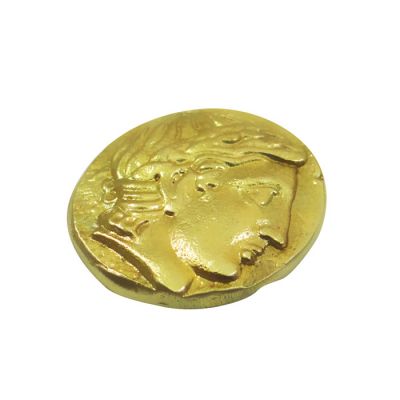 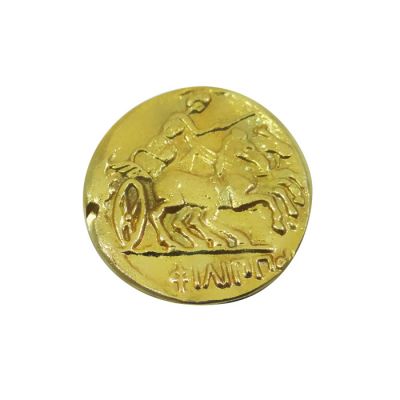 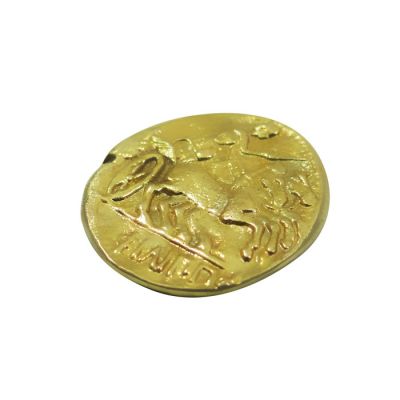 Handmade replica of the ancient gold stater of Philip II of Macedon, circa 340-328 B.C., which depicts the laureate head of Apollo, facing right. The reverse side of the coin depicts a charioteer, wearing a himation and holding the reins, driving a two-horse chariot. It also bears the inscription PHILIPPOY (ΦΙΛΙΠΠΟΥ) at the bottom.This gold stater from the Kingdom of Macedon was minted in Amphipolis. The coin replica is made of gold-plated brass. Ideal as a gift for the admirers of the ancient Greek world, but also for coin collectors and budding archaeologists. The coin is offered in an acrylic case for protection and better presentation and gift packaging.

Excepting the coins of Alexander I, those of the kings who came after him, until Philip II, did not circulate beyond the borders of the state by reason of the instability which then reigned. The currency of Philip II and Alexander III on the other hand circulated widely. Furthermore, the silver coins minted during the reign of Alexander the Great were the most popular in antiquity. Under the Hellenistic kings the circulation of coins was again limited to the Macedonian kingdom and central Greece.

The gold stater of Philip II of Macedon, was minted at Amphipolis, circa 340-328 BC. It depicts the laureate head of Apollo, facing right. The reverse side of the coin depicts a charioteer, wearing a himation and holding and the reins, driving a two-horse chariot. It also bears the inscription PHILIPPOY (ΦΙΛΙΠΠΟΥ).