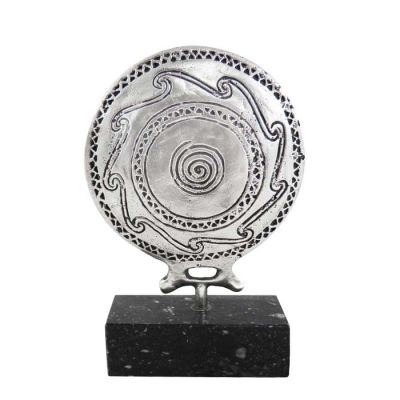 Pottery was widely used in the Early Cycladic civilization and nowadays is one of the richest sources for study of the life and art of the ancient Cycladic islanders. Among the clay vessels that were found, mostly in Syros, which are dated to the Early Cycladic II period (2800-2300 B.C.), the frying-pan vessels stood out. Inspired by their shape and their depictions, we created a silver-plated relief. The relief is made of brass, coated in silver solution 999° and placed on a marble base. It can be used as a paperweight for your office, as well.

Frying-pan vessels are kept in the National Archaeological Museum of Athens.