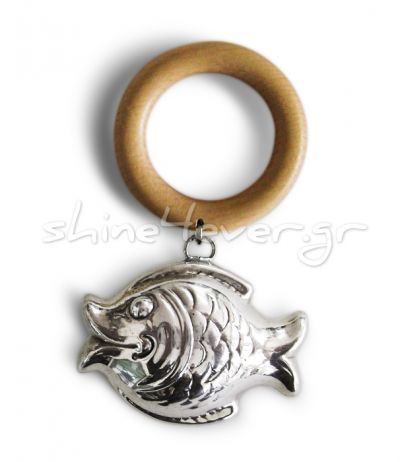 Baby rattle in the shape of a fish. In ancient Greece, the rattles in the shape of animals were especially popular and they were usually made of clay or metal. The rattle was also known as platagi. This artwork has also great religious value as it was one of the most important Christian symbols. The initials of the greek words Jesus Christ Son of God Saviour form the word Ichthys, meaning fish in greek. The rattle is made of silver 999° and is offered with a wooden ring.

In ancient Greece, rattles were usually made of clay or metal and varied in shapes. Rattles in the shape of animals, such as pigs and fishs, were especially popular. They had pebbles or chickpeas inside them, in order to create a sound.

The rattle was also known as platagi and it was the first toy given to children and newborns, since the sound it made when they shook it stopped them from crying. It was also believed that the sound of the rattle kept away the evil spirits that lay in wait around the baby’s cradle.

The fish is one of themost popular Christian symbols. It symbolized Christ himself, as it is proven by the initial letters of the greek words Jesus Christ Son of God Saviour, that spelt out Ichthys (ΙΧΘΥΣ), meaning fish in greek. It is probably the most famous symbol of Christians after the Cross. The fish symbol was used by the first Christians especially in the catacombs and in funerary inscriptions as a symbol of salvation.

Types of fish were depicted in ancient vases, coins and frescos. The fish was sacred to the Greco-Roman mythology, where it held symbolic meaning of change and transformation.

Nowadays, the fish feature prominently in art and literature.