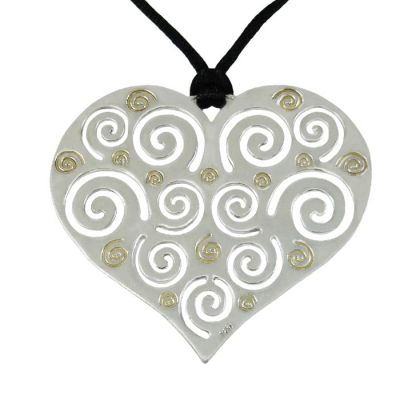 "Endless Love" silver pendant with 24 carat gold-plated small engraved spirals. The collection includes a stunning pendant and a ring dedicated to those who believe in eternal love. The sublime pendant features perforated spirals alternating with incised ones, alike a fine embroidery. You can also order the ring, a true masterpiece!

The heart is undoubtedly one of the most popular symbols on the planet, as it appears literally everywhere. In fact, its common shape resembles nothing more than a normal heart. There is ample evidence that this symbol was not originally created to represent the real human heart, but the shoot of the plant silphium, an herb that was so popular for its contraceptives in Roman times that the Romans literally drove it. to extinction. Also, the symbol of the heart goes far back in time, as it was on ancient Roman coins.

The spiral is one of the most ancient symbols and has been used since the Paleolithic era in Greece. As a symbol of ancient Greek culture, he declared the Greek origin of all things that carried him, especially before the classical period of the golden age, but also after.

The spiral unfolds through myths, religious beliefs and legends. It is engraved on the ground on rocks, but also on prehistoric megalithic monuments. The ancient Greeks knew its great mystical significance, so they designed it everywhere. From the temples and shields of the warriors, to the crowns of the beautiful kouros, to the ornaments for the women's hair and their jewelry. Crete and Santorini.