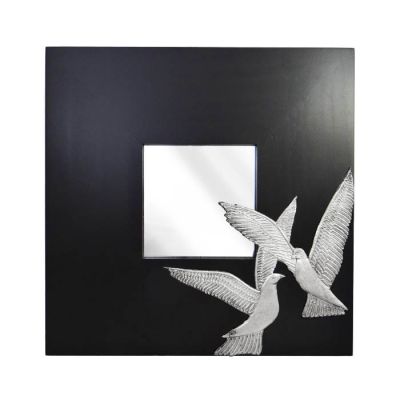 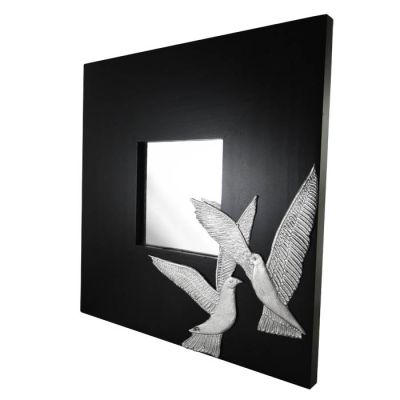 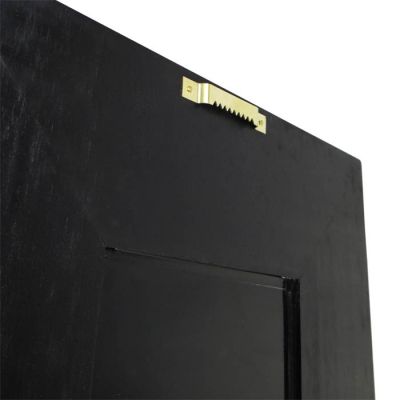 Mirror with two doves, desinged and engraved by the artist El Phil (Eleftherios A. Philippakis), on plaster to create the mould. The doves are made of copper, plated in silver solution 999° and are mounted on a wooden mirror.

Eleftherios A. Philippakis (El Phil) was born in the city of Patra, Peloponnese, in 1923. Following his graduation, from the 3rd Gymnasium of Patra, in the years of the German occupation, he worked at the cigarette industry "SPECIAL" Lainas & Skourtas in Patra, having as a goal to continue his studies.

He studied Mechanical Engineering and Electrology at the National Metsovio Polytechnic School of Athens (E.M.P.). Parallel to his studies he took private lessons in sculpture and graphic design with the professor of the School of Arts (E.M.P.), Mr. George Maglivera. At the same time he was working part time at the PERAIKI PATRAIKI factory in Kallithea in Athens, as an operator of the textile machines "ZAKAR".

For a certain period he worked as a designer at the SKOULIKIDIS cinema Studios in Psychico, Athens, for the shooting of the film "XIPOLITO TAGMA" with the director Gregory Dallas (Grigori Thalassino), the actors Hanna Bratsou, Niko Ferma and thirty children from an orphanage.

In the army he was trained in the Special Forces - School of Parachutists. He teached in the department of Mechanics, "Electronic Theory and Electrology" regarding the Telecommunication Systems and Machines. After the army with a mechanic colleague he founded a workshop for metal processing, at Nea Smiri, in Athens. Then he was employed by VIOLEX S.A. (BIC razors) in the beginning as a Technical Consultant and continued as Technical Manager of the firm for fifteen years. He was trained in the factory laboratories of the Mother Company UDEHOLM & SAOVINGEN in Sweden and was specialized on the inner texture of metals (hardness etc.).

He also attended experiments in the laboratories of the factories of CARBORANDUM - DUPONT & ICI in the United States with yearly visits for specific updates on the field. At the same time in cooperation with VIOLEX S.A. he founded an affiliate company with the title

"E. PHILIPPAKIS & CO." for the construction of machinery specialized in the processing and packaging of the razors with main goal exports in Egypt, Spain, etc.

Following his leave from VIOLEX S.A. (BIC razors) he founded his own workshop for the construction of museum replicas and special decorative items for exterior and interior decoration, at Kalamaki and he had a store in Athens, to exhibit and sell his artwork.

Together with the architects Papandoniou Costi and Lefkaditou Rena he had an exhibition outlet in Vouliagmeni close to the Astir Hotel on the main avenue and another in Corfu, with Mrs. Antonia Livaniou.

He was exporting in many big cities and business centers, in U.S.A.- AFRICA - AUSTRALIA - EUROPE.

He participated in international exhibitions of creative craftsmanship, privately and as a member of the Hellenic Organization of Craftsmanship and won many awards, distinctions and diplomas.

In 1984 he founded a new company by the name "E. PHILIPPAKIS S.A." at Corinth, close to the isthmus and he had a store / exhibition in the HILTON HOTEL of Athens, called "The Antique Shop".

He cooperated with the National Museum of Athens, the Benaki Museum, the Museum of Cycladic Art - N.P.Goulandris, the Jewish Museum, the company Collection Hellenique, creating replicas from the original exhibits as well as works of well-known artists.

With his friend Paul Karatzas, who is a chemist and his son Dimitris Philippakis he founded a workshop for silver articles at Vouliagmeni, Athens, in order to supply the Greek Museums with replicas of the original findings / exhibits and he also worked closely with distinguished artists in Greece and abroad.

In 1990 he moved all his activities from Corinth and Vouliagmeni, in two new workshops, for the creation of the museum replicas and silver articles, in Ag. Dimitrios, Athens, under the management of his son Dimitris E. Philippakis.

From 1997 his son Dimitris, has the support of his wife Elizabeth Chryssanthidou - Philippaki, who has a degree in Business Administration, major in Marketing Management. They work together, Dimitris in the technical and artistic field and Elizabeth in the marketing field having as extra activities the financial planning and follow up and the public relations of both workshops.

Now he has handed over all his professional activities to his son Dimitris, who has his own company and he only plays the role of a consultant when needed and he is engaged with.