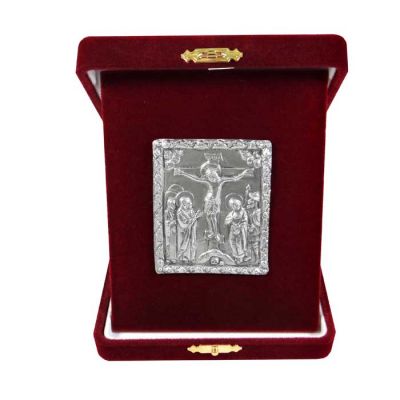 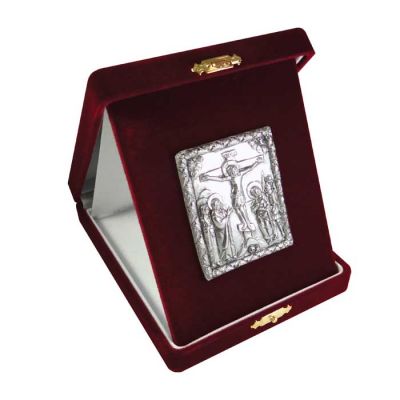 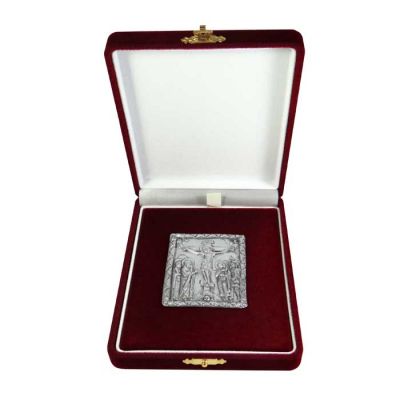 Icon of Crucifixion from the cover of a gospel made of silver with local gold plating with central representation of the "Descent into Hades", dating around 1693. This icon is part of a series of small icon collection that we have created inspired by the eighteen rectangular panels, which frame the main theme of the gospel, unfolding the cycle of the sufferings and resurrection of Christ. On the reverse, Saint Sava is depicted with scenes from his life and the Annunciation.

The copy is made of pure silver 999° and place into a burgundy velvet case. An exclusive gift that will be valued.

Order your own copy now or offer it as a special gift.

Jesus Christ, is the person whose teachings formed the base for the creation of the Christian religion. His mother was Virgin Mary. The followers of Jesus, identified him as the expected "Messiah". They believed that he was the Savior, and is considered one of God's important prophets, who was sent to save the nation of Israel from the enemies and to be a blessing for all the nations.

The events of the birth of Jesus are recounted in the four Gospels, the first four books of the New Testament, as well as in the acts of the Apostles, that refer to the life and teachings of Jesus and the life of the first Christian community.

Kykkos Monastery, is one of the wealthiest and best-known monasteries in Cyprus and lies 20 km west of Pedoulas. The Holy Monastery of the Virgin of Kykkos was founded around the end of the 11th century by the Byzantine emperor Alexios I Komnenos (1081–1118).

The monastery lies at an altitude of 1318 meters on the North West face of Troodos Mountains. There are no remains of the original monastery as it was burned down many times. The first President of Cyprus, Archbishop Makarios III started his ecclesiastical career there as a monk in 1926. He remained fond of the place and returned there many times. His request to be buried there materialized after his death in 1977. His tomb lies 3 km west of Kykkos monastery and remains a popular visitor destination.

The icon of Virgin Mary

Throughout the centuries locals have revered the icon and have attributed miracles to its presence. In 1760 a success in the struggle against locust devastation, a frequent problem of the time, was believed to be the work of the icon. The icon has also served as a template for other paintings depicting the Madonna in eastern Orthodoxy.

Among many other heirlooms there is the cover of a gospel made of silver with local gold plating with central representation of the Descent into Hades, dating around 1693 by the Diocese of Hungarovlachia. The main show is the "Descent into Hell" framed by eighteen rectangular panels, which unfold the cycle of the sufferings and resurrection of Christ. On the reverse  Saint Sava is depicted with scenes from his life and the Annunciation. The type of cover is customary that of workshops of Transylvania from the late 17th to mid 18th century and especially in Georg  May II laboratory (1688-1712).