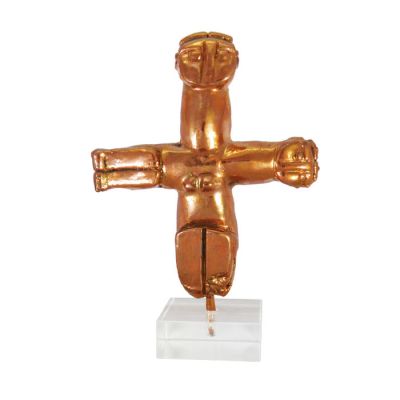 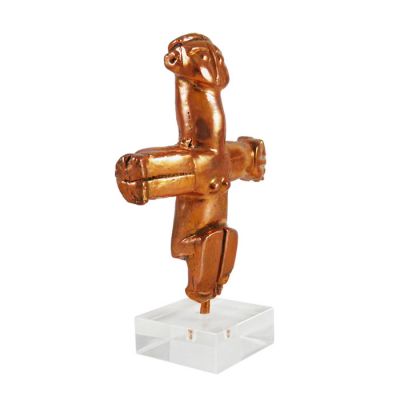 The cross-shaped (cruciform) figurine, made of picrolite, from the district of Paphos in Cyprus, dated during the Chalcolithic period (3900-2500 B.C.), inspired us to create a copper copy of the figurine. It is a double figurine of two forms, forming a right angle. The figurine stands on an acrylic base (plexiglass), so it is easier for you to decorate your office with this marvellous piece of art.

Order now yours or offer it as a special gift.

In the  Chalcolithic period (3900-2500 BC) a considerable number of highly stylized human figurines were produced in Cyprus. They were made of soft stone (picrolite) and had usually a cruciform appearance. Many similar sculptures from Cyprus can be seen at the museum of Cycladic Art in Athens. Cross-shaped figurines have been found at the district of Paphos, like the Idol of Pomos. The sculpture is on display in the Cyprus Archeological Museum in Lefkosia (Nicosia).

The squatting posture denotes childbirth. Cruciform figurines are mostly found in child and female burials, and in all probability reflect religious beliefs about fertility and re-generation. Beliefs associated with perceptions of the afterlife are not excluded. The main form of this figurine is female, greater than the secondary, which has no suggestion of any sex. The figurines depict two forms in cruciform arrangement. These two forms may represent precursors of the dual deities of the prehistoric Mediterranean.