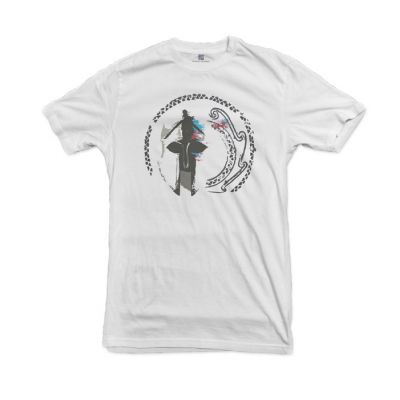 A unisex white t-shirt with a depiction of a helmet surrounded by the design found on the so-called Cycladic "frying pan". The helmets were an important part of the armour of the ancients Greeks. Our guide to the creation of this t-shirt was a Corinthian helmet, from a workshop in Peloponnese, dated to the end of 6th century to mid-5th century B.C. and unique shapes found in the Cyladic civilization. The depiction is painted in black, red and baby blue. The short sleeve t-shirt is available in small, medium, large and x-large size. It is made of 100% cotton and machine washable. A great artistic addition to any wardrobe.

Indicate your size in the comments' box of you order form.

The original helmet is kept at the Museum of ancient Olympia in Olympia.