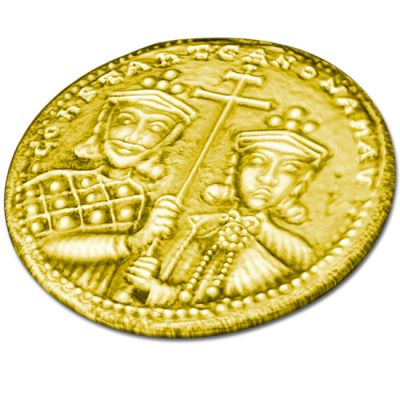 The Constantinato lucky coin has Byzantine origin. It is beleived by our people to be miraculous. This lucky coin is handmade of gold-plated 24K solid silver. It is offered to celebrate something new in our lives. The perfect gift for New Years cake, the famous Vassilopita, to offer it as a gift to newlyweds, to a mother in labour or a newborn baby, to bring them luck!

Also, see the Constantinato made of silver 925° and our collection of charms.

The so-called Constantinato lucky coin, or commonly known as Constantinata, are mainly Byzantine gold coins, which were probably minted during reign of Constantine the Great. The coins' depiction is similar to a hagiography, depicting St. Constantine and St. Helena, with the Holy Cross between them. The Constantinato coin is also called Agioconstantinato and Aiselinato.

Many folk traditions, developed mainly during the Byzantine period, speculate that the coin has miraculous powers. More specifically, pregnant women wore Constantinata, in order to protect the baby and to ease childbirth. They also hanged gold constantinata coins, as amulets, on the child's neck, to protect them against the "evil eye". According to this tradition, even today we offer gold coins as gifts or christenings to children and infants, during their birth or their baptism. Likewise, it is given as a gift to newlywed couples.

Also, during the Greek War of Independence in 1821, many Greek heroes wore Constantinata coins as talismans, in order to protect themselves. Among other traditions, it is believed that the Constantinata could cure high fever, epilepsy and jaundice, and that they accelerated the production of flour and yogurt.

Byzantine coins kept at the Numismatic Museum in Athens and the Museum of Byzantine Culture in Thessaloniki.