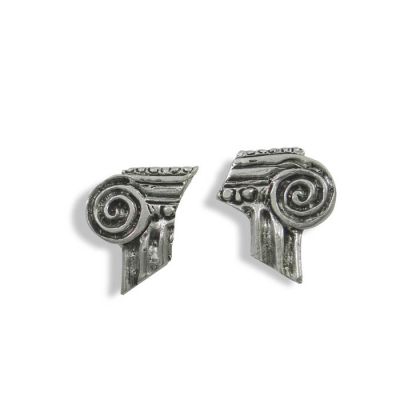 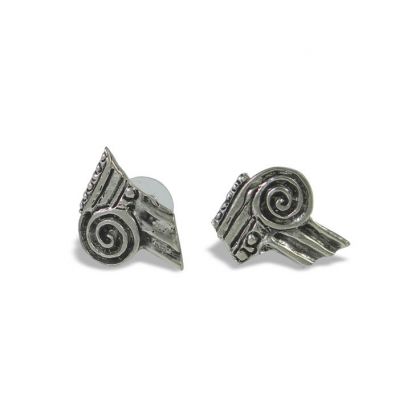 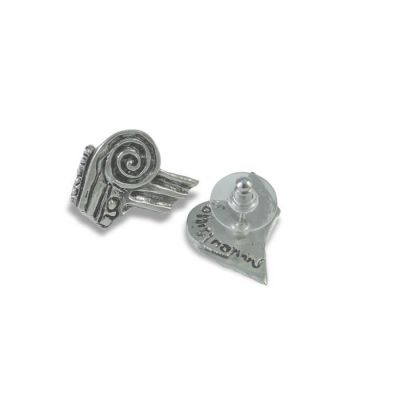 Earrings in the shape of an ancient Ionic capital. The capital is the upper part of the column, that was used in order to support the roof of the temples in Ancient Greece. The Ionic capitals are great monuments of the Ionic order, that is originated in the 6th century B.C., and of the ancient Greek architecture. The capitals are composed by spirally coiled volutes. The earring are handmade of solid silver 925°, designed and crafted by the artist Marios Voutsinas.

Marios Angelos Voutsinas was born in Paris and studied interior architecture. His involvement in jewelry design and miniature sculpture dates from 1972. His work is held by private connections around the world (the Pierides Collection; the Claude & Sydney Picasso; the Karen Burke Goulandris Collection and so forth) and is sold at the Benaki Museum Art Shop and the IANOS Culture chain. In 2004 GEMA Publications published a retrospective tribute covering 30 years of his creative output.

Since 1978 he has had 15 solo exhibitions in Greece (the most recent being Tea with Mrs. Katakouzinou at the A.&L. Katakouzinou Foundation in December 2009; and The Glass Menagerie at the Genesis Gallery in December 2013), Europe and America and has participated in numerous group exhibitions.Involved with equal passion in the creation of jewelry and of objects, Marios Voutsinas continues with persistence and knowledge with a foot in both these creative worlds, maintaining a creative artistic equilibrium with no preset points.

He retains eclectic elements of Art Nouveau and Art Deco as well as references to well-loved foreign artists such as Alphonse Mucha, Rene Lalique, Fulco di Verdura and Jean Schlumberger, or his preferred representatives of the Greek Thirties generation; and creates jewelry that is unique in its rituals of line and materials, which composes a distinct universe, a tender handmade shell, inviting visitors to a gradual revelation, rewarding them by immersing them excitingly in a progression of perpetual prestidigitational processes and transformations of the most heterogeneous materials: lace, which through a lost-wax process is transformed into a tracery of precious metal; silver and bronze bows, which preserve intact the remembrance of how they rustled as textiles; semi-precious stones, mother-of-pearl buttons and fragile porcelain; intricate wood carved parts of fruit trees and dull pieces and parts of old crystal: all compose the instantly recognizable creative world of Voutsinas, with its own distinct theatrical aura.